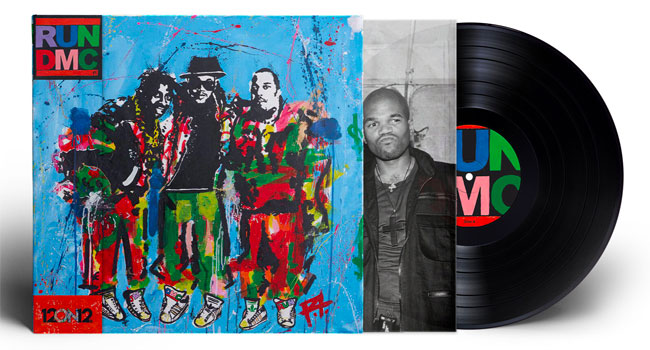 For the first time in history, a collection of artwork NFTs representing a limited edition vinyl album is being dropped. Run DMC, regarded as one of the most influential and pioneering acts in the history of hip hop, are releasing these NFTs of the bespoke artwork by rising LA artist Reena Tolentino, with 12on12. The drop is to celebrate the 35th anniversary of seminal 1986 album Raising Hell and to pay tribute to their late bandmate Jam Master Jay.

The NFT artwork derives from the 12on12, double disc limited edition compilation that Run DMC curated to tell the story of their legacy. Only 500 hand-numbered editions of the vinyl are available at 12on12.com and the handpicked iconic track-listing, features songs that inspired, affected and changed the group’s music.

“There are so many things that influence and inspire us. Music is one of them. It’s a never-ending process,” DMC shares. “We are happy to showcase where some of it comes from! It all starts and ends with vinyl! If it ain’t vinyl…Then it ain’t vinyl!”

Alongside tracks by early rap trailblazers The Sugarhill Gang and Afrika Bambaataa, the group have also highlighted songs that helped form the sonic foundations of the nascent hip hop sound as it emerged and evolved in New York in the early 1980s, including the breaks-goldmine of MFSB’s Love Is The Message and Kraftwerk’s game-changing Trans-Europe Express.

The artwork for the record has been created by Reena Tolentino, a rising star artist in Los Angeles. Reena also presents her own interpretation of the classic RUN DMC logo, one of the most iconic hip-hop logos of all time, which features on the record and is included as a separate sticker within the package.

The release continues to cement 12on12’s reputation for unique “vinylworks” and bespoke collectors editions that live at the intersection of music, art and pop culture, providing a unique canvas for cultural icons to curate the soundtracks to their lives.

With global trends growing around nostalgia and legacy artists dominating consumption both within rising vinyl sales and across streaming platforms, 12on12 continue to prove themselves an exciting creative brand capturing a powerful part of the zeitgeist.