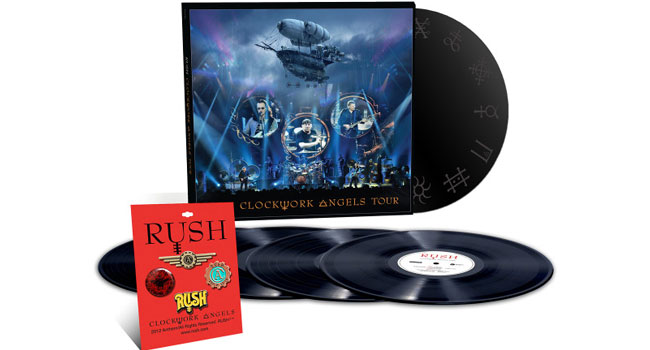 Rhino will release the music from that collection on vinyl for the first time on October 11th. Clockwork Angels Tour is pressed on five 180-gram LPs and includes an etching on the flipside of the final album. The set comes packaged in a two-piece telescope box with a full-color booklet, and a code to download a high-definition digital version of the album.

Clockwork Angels was the 19th studio album that Rush made over 38 years, and the last since Geddy Lee, Alex Lifeson and Neil Peart stopped recording and touring in 2015. The album was followed by an extensive 73 date tour that ran from September 2012 to August 2013. In November 2012, the band recorded concerts in Phoenix, Dallas and San Antonio for a live album that was released as a 3 CD/DVD set in 2013. The new vinyl version of Clockwork Angels Tour includes all 31 tracks from the original CDs.

For the concert’s first set, Rush focused mainly on songs from its run of stellar albums in the Eighties with “Subdivisions” (Signals, 1982); “The Body Electric” (Grace Under Pressure, 1984); and “Force Ten” (Hold Your Fire, 1987). The band’s platinum-certified album Power Windows received a lot of attention throughout the concert, with performances of “The Big Money” and “Grand Designs” along with three more album tracks.

During the concert’s second set, the band performed live with a string ensemble. Led by Canadian conductor David Campbell, the Clockwork Angels String Ensemble accompanied the band on 10 of the 12 songs from the Clockwork Angels. The ensemble also joined the band on “Dreamline” (Roll The Bones, 1991), “YYZ” (Moving Pictures, 1981) and “Red Sector A” (Grace Under Pressure, 1984).

The vinyl set also features the bonus tracks from the original release, including a version of the classic “Limelight” that the band recorded during soundcheck.

Fans who order from Rush’s website will receive a free Clockwork Angels Pin set from Rush Backstage, while supplies last.

*With the Clockwork Angels String Ensemble