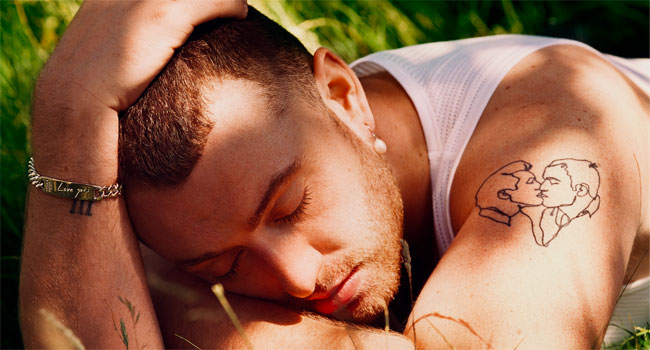 In the official video, Smith dances alone with abandon, reveling in their newfound freedom and emerging from a stormy night to greet the morning sun. The clip was directed by Emmy award winning filmmaker Luke Monaghan, who also teamed up with Smith on such videos as “Too Good At Goodbyes” “Writing’s on the Wall” and “I’m Not the Only One.” Their work together has amassed over 2.5 billion streams.

The album’s 17 songs were written over the course of the past two years. The pandemic gave Smith a fresh perspective on the album and impacted both its title and the recording of tracks such as the recently released “My Oasis,” a cross-continental collaboration with Burna Boy.

“Every time I went into the studio I promised myself I would shoot for the stars and have no limitations…I am sorry it’s taken a while,” Smith writes in sharing the announcement. “But these unprecedented times gave me the room and space to fall in love with these songs all over again…After it all I still believe love is the answer. And with love in our hearts and kindness in our words and actions, we sing on.”

The new album builds on the 30 billion career streams Smith has amassed and the global success of the multi-platinum debut and sophomore albums, In the Lonely Hour and The Thrill of It All. Smith worked with world-renowned British fashion photographer/filmmaker Alasdair McLellan (Vogue, Kim Jones, Louis Vuitton) for the Love Goes artwork.

Love Goes will be available on CD, 2 LP and clear cassette. Fans who pre-order the digital album will instantly receive “Diamonds” plus “My Oasis,” “Dancing with a Stranger,” the chart-topping collaboration with Normani that has sold more than 13 million units and racked up over 2.5 billion streams worldwide, “To Die For” and “How Do You Sleep?”

The new album also features collaborations with Labrinth (“Love Goes”) and Calvin Harris (“Promises”). Love Goes follows 2017’s The Thrill Of It All, which debuted at No. 1 on the Billboard 200 and also topped the charts in the U.K., Ireland, New Zealand, Norway, Sweden, the Netherlands and Belgium. Awarded four stars by Rolling Stone, the album included the hit single “Too Good At Goodbyes,” which recently became Smith’s second song to receive over a billion streams on Spotify, after “Stay With Me.” Smith, who has won GRAMMY, BRIT, Golden Globe and Oscar awards, recently featured on Tiwa Savage’s new song, “Temptation.”