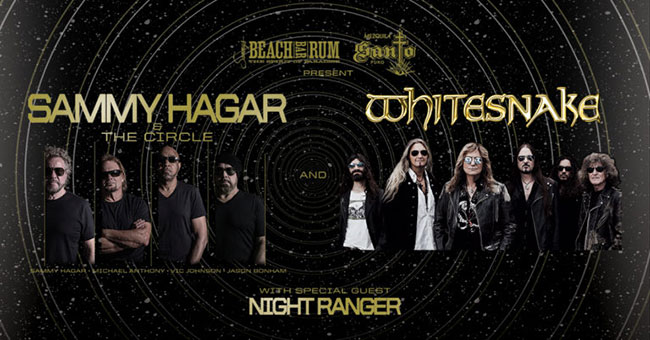 Sammy Hagar has canceled his upcoming tour to South America with The Circle and Whitesnake due to the coronavirus outbreak. The Red Rocker shared a personal video message on Wednesday (March 11th) saying how disappointed he is to cancel.

“I’m making the official announcement: The Circle shows have been canceled. It’s official,” Hagar states in a video. “I also want to tell you that no one is more disappointed than me and the band. We were so looking forward to coming down there and playing for the first time. I’ve never played in South America, ever in my life. So I just wanted to give you a personal apology. If it wasn’t for all of this coronavirus stuff, the safety of the fans, the band, my family, your families, we’d be coming. We went back and forth with the local promoters. They tried to ensure our safety the best they could. In the end, we all agreed it’s not a good time.”

Five dates were scheduled starting March 14th in Chile and Brazil, but canceled in conjunction with local promoters in order to reduce potential health risks in response to the current global health crisis. Fans are encouraged to contact the local promoter or any of their authorized point of sales where they purchased tickets for further questions and refunds.

As of this writing, the group is set to tour the U.S. with Whitesnake and Night Ranger starting July 9th in West Palm Beach, FL with stops in Tampa, Cincinnati, Dallas, Phoenix and more, before wrapping September 20th in Chula Vista, CA.

Hagar is the latest of many artists and festivals canceling due to the global pandemic. Santana is canceling all spring European dates on his Miraculous Supernatural 2020 World Tour as Pearl Jam, Slipknot, Old Dominion, Sons of Apollo, Zac Brown Band and others have either postponed or canceled dates including in the U.S. Dozens of other artists and events have canceled shows with more expected to follow.

Earlier today, the City of Houston and the Houston Health Department forced the Houston Livestock Show and Rodeo to shut down 11 days early because of public health concerns. SXSW in Austin and the Ultra Festival in Miami were also forced to cancel by local authorities last week. Yesterday, promoters Goldenvoice Entertainment announced that Coachella and Stagecoach have been pushed back six months to October 2020 due to the coronavirus outbreak.