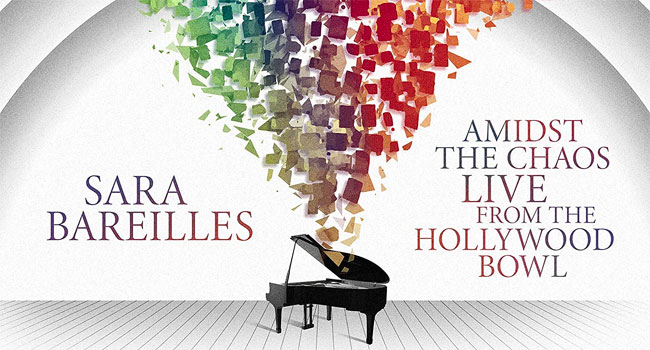 Amidst The Chaos: Live at The Hollywood Bowl due May 21st

Grammy Award-winner, Tony and Emmy Award-nominated singer, songwriter, actress and author Sara Bareilles announces her new album, Amidst the Chaos: Live at the Hollywood Bowl, to be released on May 21st on 2 CD and limited edition 3 LP vinyl via Epic Records, along with a new exclusive merch collection. Fans who pre-order the record will get an instant download of the first track on the album “Orpheus/Fire.”

To celebrate the upcoming album, Bareilles will bring live music back to the Hollywood Bowl, with a special livestream event airing May 7th at 7 pm ET on her YouTube channel. Bareilles and her band will perform an abbreviated set, sharing the songs of Amidst the Chaos with her fans all over the globe and marking her return to this historic stage. The show will also feature special guests Renée Elise Goldsberry, Paula Pell and Busy Philipps, Bareilles’ castmates from the new Peacock Original musical comedy Girls5eva, which is created and executive produced by Meredith Scardino, along with executive producers Jeff Richmond, Tina Fey and Robert Carlock. The cast members will debut an original song from the series. Girls5eva premieres Thursday, May 6th on Peacock.

“I played hundreds of shows all over Los Angeles for years, starting with open mics and tiny clubs,” Bareilles shares. “As I evolved as an artist, I always wondered if I would ever earn my place onto the Hollywood Bowl marquee. When it finally happened, it was an extraordinary honor and one I knew I would want to remember forever.”

Amidst the Chaos: Live at the Hollywood Bowl was recorded in November 2019 during her 28-city Amidst the Chaos Tour. Guests on the upcoming album include T Bone Burnett, Emily King and The Milk Carton Kids as well as the Amidst the Chaos band including Charley Drayton, Solomon Dorsey, Rich Hinman, Butterfly Boucher, Misty Boyce, Maria Im and Melody Giron.

“I had no way of knowing when we ended the Amidst the Chaos Tour that those would be my last live shows for the next year and a half,” she adds. “Revisiting the time spent with my fans and the audience takes on an even deeper meaning in the context of this time away from live performance. I am so grateful we have this time capsule to celebrate what is now on the horizon again. A return to live music.”