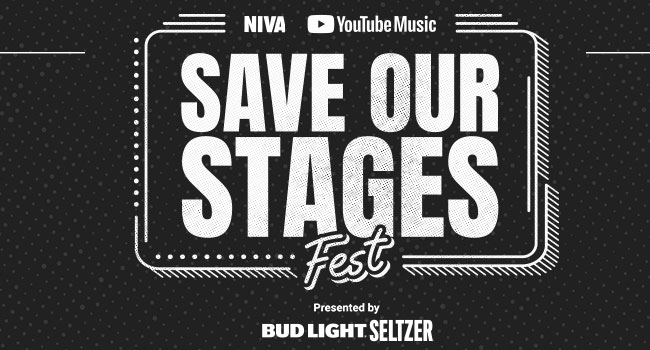 Independent venues are closing permanently all around the country due to COVID-19 shutdowns. Now, the National Independent Venue Association (NIVA) has teamed with dozens of artists for a three-day rallying to the aid of independent music venues at risk of closing their doors permanently. The $10 billion Save Our Stages Act, which is attached to the Heroes Act, is currently before Congress, but has been delayed by conflicting messages from President Donald Trump.

Save Our Stages Fest takes place October 16-18 and will feature original performances and commentary from diverse talent across genres and shot live at iconic indie stages across America. It aims to preserve our nation’s independent live music scene. The festival is raising funds for the NIVA Emergency Relief Fund, where any member organization can apply for support.

Brittany Howard, Brothers Osborne, Reba McEntire, Dave Matthews, Foo Fighters, G-Eazy, Kelsea Ballerini, Little Big Town, Leon Bridges, Jason Mraz, The Lumineers, Miley Cyrus, and dozens of others will participate in the festival that will be livestreamed on YouTube with select performances on the artists’ respective pages. The event is produced by YouTube Music and NIVA and will be hosted by Reggie Watts. The all-original performances will be staged from 25 different independent venues across the country including Hotel Cafe in Los Angeles, The Ryman in Nashville, Mercy Lounge in Nashville, Exit/In in Nashville, Troubadour in Los Angeles, The Whisky A Go Go in Los Angeles, and more.

NIVA’s Save Our Stages campaign helps to preserve and nurture the ecosystem of independent live music venues and promoters throughout the United States. The partnership with YouTube was announced last month where the entities will work on unique programming that will help bring live performances back into music venues safely. In addition, YouTube will help raise awareness and funding for the NIVA Emergency Relief Fund.

NIVA’s Emergency Relief Fund was created to support America’s most vulnerable venues and is intended to provide short-term relief for independent music venue owners and promoters on the precipice of eviction or permanently shuttering due to the COVID-19 shutdown. The fund is intended to work hand-in-hand with federal and local programs, assisting with the most immediate needs facing the country’s independent venues and promoters and making it more likely that they will be able to reopen, fully, when it’s safe.