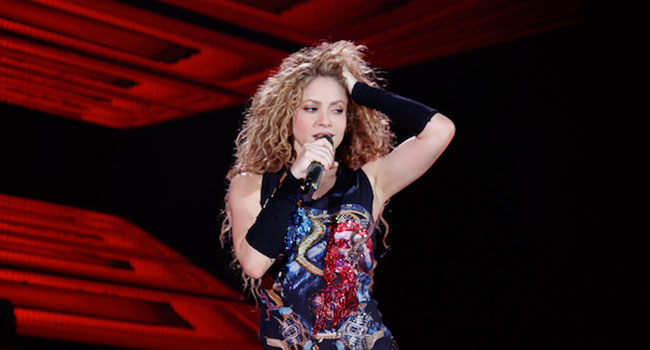 Following the successful release of her album El Dorado, Shakira returns to the world stage with her most celebrated show yet. Shakira In Concert: El Dorado World Tour premiering Friday, January 31st from 8-10 pm ET/PT, will give viewers an exclusive look at Shakira’s most recent tour before her upcoming halftime performance during football’s biggest night in February.

The special will simultaneously be available on HBO GO, HBO NOW, HBO On Demand and partners’ streaming platforms in the U.S. and Latin America.

In Shakira In Concert: El Dorado World Tour, the famed Colombian singer performs her smash hits like “Chantaje” and “La Bicicleta,” as well as favorites from her 20+ year repertoire such as “Hips Don’t Lie,” “Waka Waka (This Time for Africa)” and “Estoy Aqui,” before a sold out crowd at the Los Angeles Forum. The concert film also features documentary segments that give viewers an intimate behind-the-scenes look at the dedication she puts into her craft in order to give her fans the most electrifying concert experience.

“We are thrilled and proud to have Shakira as part of our growing list of A-list artists featured on our network,” says Lucinda Martinez, Executive Vice President, Multicultural & Brand Marketing, WarnerMedia Entertainment. “This concert special will truly resonate with Shakira’s global fan base, as it takes you behind the scenes of her biggest world tour yet.”

Shakira is the highest-selling Colombian artist of all time with over 80 million albums sold worldwide. She has won 263 major awards including a Grammy for Best Latin Pop Vocal Album and a Latin Grammy for Best Contemporary Pop Vocal Album for El Dorado. Shakira has collaborated with some of the biggest and best in the music business, such as Beyonce, Rihanna, Alejandro Sanz, Calle 13, Pitbull, Kid Cudi, Nicky Jam, Maluma, Dizzee Rascal, and Carlos Vives, and performed at three FIFA World Cups. In addition to music, Shakira has served as a coach on NBC’s reality singing competition The Voice and starred as Gazelle in the 2016 Disney film Zootopia. She served on President Obama’s Advisory Commission on Educational Excellence for Hispanics and founded the Pies Descalzos Foundation which provides education and nutrition to impoverished children in Colombia. Shakira is currently recording new music.