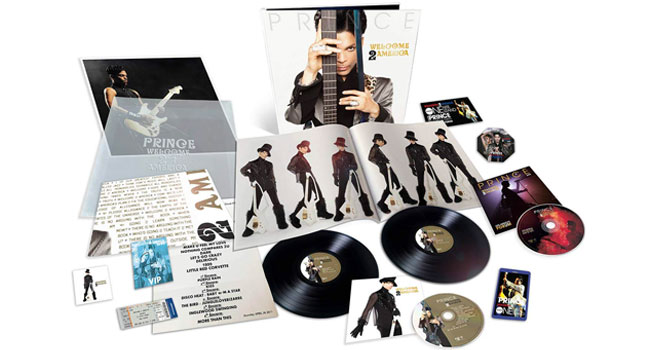 The Prince Estate has announced the release of Welcome 2 America, an album recorded in the spring of 2010 and then mysteriously archived by Prince before its release, for CD and 2 LP on July 30th. The statement album documents Prince’s concerns, hopes, and visions for a shifting society, presciently foreshadowing an era of political division, disinformation, and a renewed fight for racial justice. The album features some of Prince’s only studio collaborations with the bassist Tal Wilkenfeld, drummer Chris Coleman, and engineer Jason Agel, with additional contributions from New Power Generation singers Shelby J, Liv Warfield, and Elisa Fiorillo and keyboardist Morris Hayes, who Prince also recruited to co-produce the album.

The Deluxe Edition combines the 2 LP and CD versions of the album with a never before released Blu-ray of Prince’s full April 28, 2011 performance at The Forum, part of the Welcome 2 America Tour’s historic 21 Nite Stand in Los Angeles. The show is presented in stereo, 5.1 surround and Dolby Atmos, and includes 24 tracks from across Prince’s career, from his biggest hits to fan favorites to ten rare covers. In addition, the deluxe edition features a 32 page 12×12 book, exclusive poster and an embossed vellum envelope of limited edition memorabilia all housed in a luxe, gold embossed package. Experienced as a complete package, the Deluxe Edition provides an immersive view of Prince’s creative genius during his spontaneous, energetic, and thought-provoking Welcome 2 America era.

The vinyl edition has the 12 songs spread across three sides on 2 LPs in gorgeous gatefold packaging, with a custom etching on the fourth side. A limited edition gold 2 LP edition will be available through Prince’s online store.