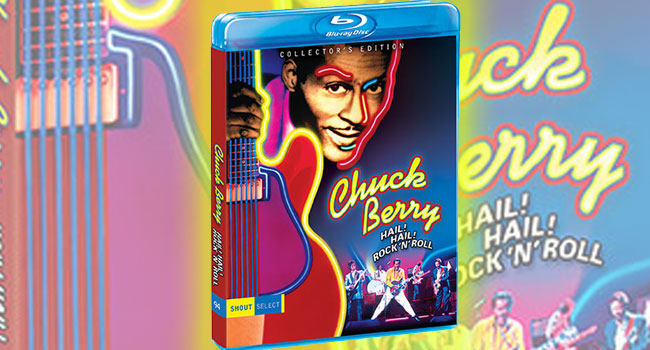 Hail! Hail! Rock ‘n’ Roll (Collector’s Edition) will be available for the first time on Blu-ray on Nov 19th

Shout! Factory pays homage to a legend with the November 19th Shout Select release of Chuck Berry: Hail! Hail! Rock ‘N’ Roll (Collector’s Edition) on DVD, and for the first time ever, on Blu-ray.

The unforgettable life and music of legendary rock pioneer Chuck Berry are celebrated in this landmark feature film, capturing a once-in-a-lifetime gathering of rock ‘n’ roll’s finest! In 1986, Keith Richards invited a roster of brilliant musicians to honor Chuck Berry for an evening of music to commemorate Berry’s 60th birthday, including performances by Eric Clapton, Robert Cray, Linda Ronstadt, Etta James, and Julian Lennon, along with archival footage of an unforgettable duet by Chuck and John Lennon.

Special features include an introduction by Hackford, nearly an hour of rehearsal footage, making-of documentary, trailer, Witnesses to History documentary parts one and two, “Chuckisms” featuring a collection of Berry remarks and “The Burnt Scrapbook” where Berry reminisces over his musical memories with The Band’s Robbie Robertson.