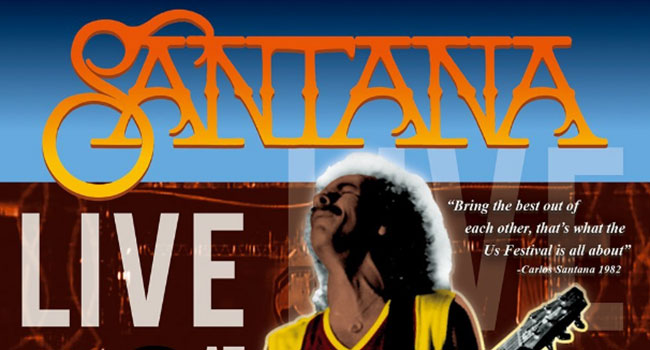 Film documents his 1982 US Festival performance

Shout Factory has announced that it will release Santana: Live at US Festival on Blu-ray and DVD on September 6th. From award-winning filmmaker and rockumentarian Glenn Aveni, Santana: Live At US Festival offers a tremendous performance from the legendary Carlos Santana, rivaling his set at Woodstock for its energy, excitement, and inspiring musicianship.

Conceived by Apple co-founder Steve Wozniak and music impresario Bill Graham, the US Festival was a transformative event for Santana in his long and illustrious career, and this performance from September 4, 1982 represents the Rock and Roll Hall of Famer at his absolute best.

Bonus features on each disc include “Santana Reflects On His Career,” “Explaining His Signature Sound,” “The Theory Of Santana’s Music” and “Santana Interview Outtake.”