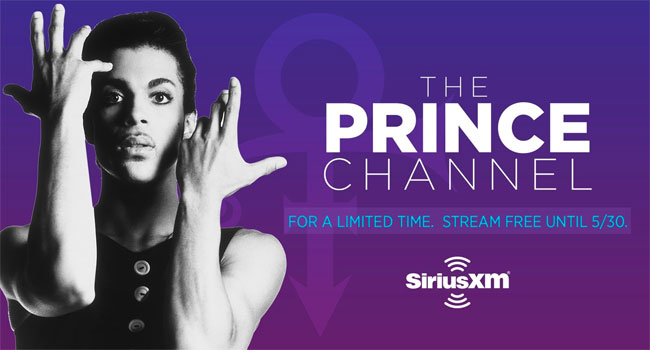 SiriusXM’s channel devoted to the music of Prince kicks off its limited run launch with an extraordinary never-before-heard demo of a conceptual radio show created by Prince for a Sirius Satellite Radio channel from 2005. The show can be heard for the first time ever on channel 30 and the SiriusXM mobile app on Friday, May 1st at 7 pm ET.

Created by Prince around the release of his celebrated 3121 album, the potential channel demo, running more than two hours, features songs from his unparalleled catalog, personal favorite selections by other artists, mixes, interviews, and a peek into his legendary vault of unreleased studio and live recordings. Prince collaborated with DJ Rashida, who hosts the show, with Prince joining throughout.

The Prince Channel will also feature music from the legendary artist’s catalog, from early recordings to his biggest hits, a takeover from Sheila E., special playlists from Jimmy Jam and Terry Lewis, and SiriusXM’s recent Let’s Go Crazy: The Grammy Salute To Prince Town Hall, featuring Jimmy Jam, Sheila E. and H.E.R. Music by artists that Prince was closely connected to, inspired by, and collaborated with will also be featured.

The channel is part of SiriusXM’s free streaming offer for non subscribers through May 30th. No credit card or commitment is required. The SiriusXM app is available on mobile phones, tablets and computers, as well as on a wide variety of connected devices in the home including smart TVs, devices with Amazon Alexa or the Google Assistant, Apple TV, PlayStation, Roku, Sonos speakers and more. The SiriusXM app also offers additional features such as SiriusXM video, Personalized Stations Powered by Pandora that listeners can curate themselves, and an On Demand library with more than 10,000 hours of archived shows, exclusive music performances, interviews and audio documentaries.