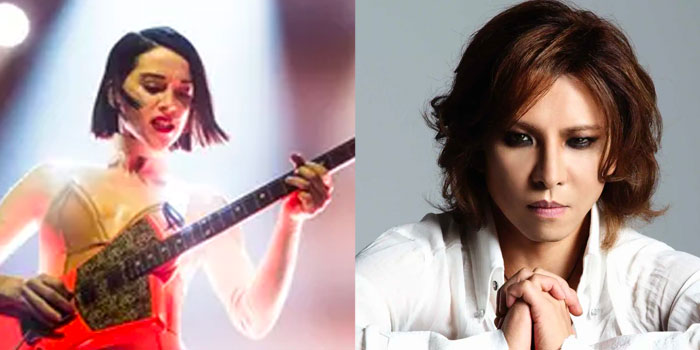 The surprise pairing of the two emerged organically, born of a kindred passion for genre-bending originality. Both have transcended musical boundaries to forge their own singular musical and visual identities, making it as natural as it was unexpected for them to come together.

“It was an honor to work with the amazing Yoshiki on this new version of ‘New York’,” St. Vincent shares. “Yoshiki’s arrangement added to the song in the way time or distance transform longtime friends or relationships: the original is still recognizable, but subtly and significantly altered.”

“As an artist, I admire how St. Vincent approaches music in an innovative and courageous way,” Yoshiki states. “Her music breaks the boundaries of genres, which is a mindset I can completely relate to. My band X Japan played the Coachella Festival in 2018 at the same time that St. Vincent performed, but at that time we didn’t meet. But this year, through mutual friends, we were introduced. In terms of ‘New York,’ it’s a great song to start with, and I’m grateful that she trusted me to fully rearrange the song with my classical approach. I hope St. Vincent’s fans enjoy it, and that my fans will too.”

Annie Clark made her recorded debut as St. Vincent in 2007 with Marry Me and has since become one of the most innovative and enigmatic presences in modern music.

Each of St. Vincent’s four subsequent albums has met with critical acclaim and commercial success eclipsing that of its predecessor. These albums would include Actor (2009), Strange Mercy (2011), and her self-titled fourth album and winner of the 2014 Grammy for Best Alternative Album, making her only the second female artist ever to win in that category. In addition to these solo works, St. Vincent joined with David Byrne to record and release the collaborative album Love This Giant in 2012, and performed with Dave Grohl, Krist Novoselic, and Pat Smear of Nirvana at the band’s 2014 induction into the Rock and Roll Hall of Fame, playing the season finale of Saturday Night Live that same year.

In 2017, working with co-producer Jack Antonoff, St. Vincent created a defining statement with MassEducation. As ambitious as it was accessible, the album broke St. Vincent into the U.S. and UK top 10s while landing at No. 1 on the Best of 2017 lists of Jon Pareles of The New York Times and The Guardian — and placing high in the year-end rankings of The AV Club, Billboard, Entertainment Weekly, Mashable, The New York Daily News, the NME, Noisey, Paste, Pitchfork, Q, Stereogum, USA Today, and more.

St. Vincent’s latest album, MassEducation, reveals another dimension of 2017’s universally acclaimed MassEducation. A stunning standalone work in its own right, MassEducation was recorded live in the studio by Annie Clark on vocals and Thomas Bartlett on piano over two nights in August 2017 during the mixing of MassEducation.

The album lays bare the exquisite songcraft of its other half, rendering songs like “Slow Disco” and “Savior” and their subjects in vivid, vulnerable new light. Clark herself describes the album as “two dear friends playing songs together with the kind of secret understanding one can only get through endless nights in New York City.”

Outside of recording and performing, St. Vincent has directed the short horror film The Birthday Party, released two editions of her signature Ernie Ball Music Man guitar, and co-written and starred as a fictionalized version of herself in the upcoming film The Nowhere Inn.

As a solo artist and leader of the stadium-packing rock group X Japan, Yoshiki has sold a combined 50 million albums and singles worldwide. He has headlined the world’s most prestigious venues, such as Carnegie Hall, Madison Square Garden, and Wembley Arena; and has sold out the Tokyo Dome a record-setting 18 times. His works span multiple genres, including rock, pop, classical, and film. He has composed the theme for the Golden Globe Awards, a concerto for the Emperor of Japan, and the theme for the world’s most popular animation series Attack on Titan, just to name a few. Yoshiki’s musical versatility has led to collaborations with Beatles producer George Martin, Roger Taylor of Queen, and Sarah Brightman; as well as his recent work with Bono, will . i . am, and Jennifer Hudson on the song “#SING4LIFE”. Yoshiki is currently composing music for xXx 4, the next film in the Hollywood blockbuster franchise starring Vin Diesel, and other soon-to-be-announced TV and film projects.