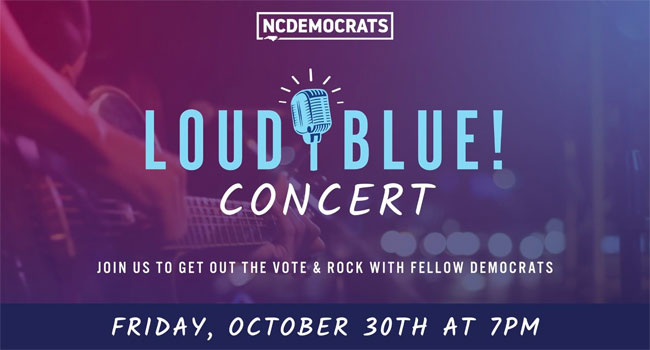 In an effort to drive voter turnout in North Carolina and help flip the state Blue, a group of nationally acclaimed musicians and artists are coming together to perform at the virtual Loud Blue! Vote for NC Concert. The concert, hosted by the North Carolina Democratic Party (NCDP), is a free event that will take place on Facebook Live on October 30th at 7 pm EDT.

“I believe music is woven into the fabric of almost everything that we do. It’s the soundtrack that connects us to seminal moments in our lives and history – like the critical moment we face right now. I could not be more humbled by the urgency with which my musical brothers and sisters lent their voices to this effort. They know how music can inspire, encourage and motivate – and their efforts call us to be sure that when we look back on this defining moment, we know we’ve done all we can to meet it,” Merrit shares.

“We are so grateful that these supporters have recognized the importance of North Carolina this year. We are only a few days away from the most critical election of our lifetimes, and the road to the White House and flipping the US Senate is paved Carolina Blue. We are also looking forward to celebrating the arts while we get out every crucial vote in the final days of the cycle,” adds Chairman of the NCDP Wayne Goodwin.

With the upcoming election arguably being one of the most important in our country’s history, North Carolina is the only state in the nation this cycle that is a presidential battleground, has competitive U.S. Senate and Gubernatorial Races, has pickup opportunities in the U.S. House, and has a chance to take back the legislature. This Get Out the Vote event aims to motivate North Carolinians to hit the polls on October 31st (the last day for early voting in NC) and November 3rd, and to celebrate one of the most diverse slate of candidates in North Carolina history.