Famed country musician Kix Brooks is setting out across the states to find America’s best steakhouses on Steak Out with Kix Brooks, premiering Tuesday, July 14th at 9 pm ET / 6 pm PT on Cooking Channel. While on the road touring as a part of country music duo Brooks & Dunn, he discovered that it was rare for a city not to have a steakhouse that put a unique spin on the classic steak, making it a cut above the rest. Big flavors and big meat take center stage, as Brooks visits Dallas, Denver, New Orleans, New York City, Omaha and Washington D.C. to discover all of their delicious carnivorous offerings.

“Kix Brooks is a great addition to Cooking Channel as an aficionado of food and wine. Over the years, viewers have come to know him as a legendary country music artist. Now, on Steak Out with Kix Brooks, they get to meet a different side of him – Kix Brooks: the passionate meat-lover,” said Michael Smith, General Manager and Senior Vice President, Cooking Channel.

“We searched the country for some of the best steakhouses,” said Brooks. “If there is one thing I love as much as music – it is a great steak, so I can’t wait to share with viewers what we found.”

“If there is one thing I love as much as music – it is a great steak!”

Over the course of the six half-hour long episodes, Kix explores an assortment of steakhouses ranging from the traditional to the modern pushing culinary boundaries. On the premiere episode, Brooks is in the heart of steak country to visit three local legends in Omaha, Nebraska. His first stop is at the family-owned and operated Johnny’s Café, which started as a small saloon nearly a hundred a years ago and is now a classic steakhouse serving up the juiciest prime rib in town. Just down the road, Brooks gets a taste of Dario’s traditional European fare, including steak frites and a decadent chocolate cake made with dark Belgian beer. Last but not least, Brooks checks out Gorat’s, a favorite amongst locals for their version of the quintessential Omaha dish – the whiskey steak.

Fans can check out Brooks’ ultimate guide to turning out a perfect steak worthy of the country’s best steakhouse at CookingChannelTV.com. They can also join the conversation on Twitter using #SteakOut.

Kix Brooks first rose to fame as one-half of country music’s successful duo Brooks & Dunn, and today, continues his music career as a solo touring and recording artist. With vast interests and passions, Brooks’ impressive resume includes hosting the award-winning radio show American Country Countdown, Kickin’ It with Kix, and is also a regular columnist for Country Weekly. In addition to music, Brooks has pursed a variety of other passions leading him to raise cattle, and become a co-owner of Nashville’s award-winning winery Arrington Vineyards. Over the years he has earned lead acting and film producer credits under his belt. In the summer of 2015, Brooks & Dunn will join forces with Reba McEntire for Reba, Brooks & Dunn: Together in Vegas. 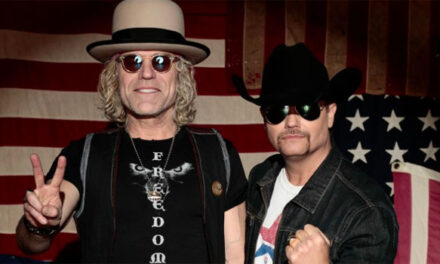