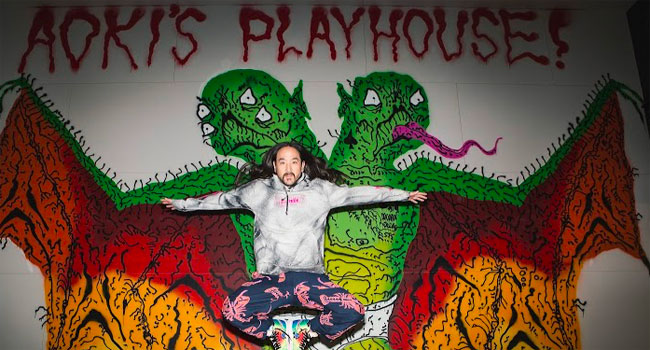 Steve Aoki’s Dim Mak and Playboy have teamed up to create a six-piece capsule collection that will be available for a limited time from Friday, January 22nd through Sunday, January 24th at playboylabs.com. The Playboy x Dim Mak drop coincides with Playboy’s exclusive feature story revealing an insider’s look at Steve Aoki’s creation of the collaboration while producing 6OKI – Rave Royale, Aoki’s new EP, also set to release on January 22nd.

The artwork for the Playboy x Dim Mak capsule celebrates the heritage of both brands by juxtaposing, stacking, and overlaying signature Dim Mak motifs to create new forms with the legendary Playboy Bunny and Masthead. The number 96, which appears on several items, marks the year Dim Mak Records was founded, and features an “incognito” version of Steve Aoki’s iconic silhouette logo donning an Oni Menpo Samurai mask, an homage to Aoki’s Japanese roots.

“Playboy is the epitome of freedom and self-expression. From inception and today, Playboy continues to shape the world with its progressive appreciation of culture and beauty. I am honored to collaborate with Playboy and to be a part of the legacy,” says Steve Aoki.

Images from Playboy’s exclusive interview with Steve Aoki were photographed at Aoki’s Playhouse, his sprawling home and studio in Las Vegas, and capture the two-time Grammy-nominated producer/DJ wearing pieces from the Playboy x Dim Mak capsule while producing the 6OKI EP.

Steve Aoki pays homage to his club and festival roots with his Dim Mak EP, 6OKI – Rave Royale. The EP includes six hard-hitting collaborations with Timmy Trumpet, k?d, Gammer, Brennan Heart, Ben Nicky, and Hasse de Moor giving each song its own fresh sound. Whether it is “BIB’s” pulsating low-ends, drilling synths on “Like It Like That (feat. Spyro & MYLKI),” eccentric percussion throughout “Incoming,” invigorating wubs on “Mind Control,” explosive melodies via “Close to You (feat. PollyAnna),” or a brassy revamp of Pulp Fiction’s famous guitar riff on “Tarantino (feat. STARX),” Aoki and his collaborators deliver on each track. The sonic diversity and uplifting energy of 6OKI creates a much-needed out-of-body experience for listeners, transporting them as close to a Rave Royale as possible.