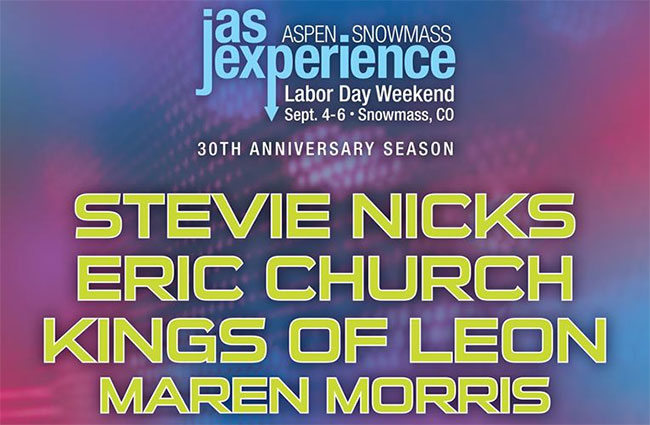 Jazz Aspen Snowmass (JAS), celebrating their 30th Anniversary in 2020, has just announced the initial lineup for the highly anticipated Labor Day Experience including headliners Stevie Nicks, Eric Church and Kings of Leon, along with Maren Morris, and additional acts to be announced at a later date. All four artists will be performing for the first time at JAS. Three-day Early Bird passes will go on sale Friday, December 20th at 10 am MST. Daily schedules will be announced at a later date.

“It’s a thrill to be able to celebrate our 30th Anniversary Season kick-off by announcing four great artists making their JAS debuts in 2020,” says JAS President/Founder Jim Horowitz. “The event’s momentum coming off last year’s epic shows from Sting & John Mayer, among others, is at an all-time high!”

Passes can be purchased at 866-JAS-TIXX (527-8499) or jazzaspensnowmass.org. JAS Labor Day tickets will no longer be available for sale at the Belly Up box office. In addition to the three day general admission pass JAS will also be selling the Three Day Deck Pass which includes complimentary grille fare, private restrooms and a private bar with complimentary beer, wine and a daily cocktail. All sales are based on availability, with an increase in prices later this winter.

Donor (VIP) three day passes will also be available on Friday at jazzaspensnowmass.org or by calling 970.920.4996. Donor passes include parking options, afternoon grille fare, live cooking stations, gourmet dinner and dessert, premium open bars and a substantial tax-deduction. JAS is a 501c3 not-for-profit organization that has contributed over $7.5 million to music education programs since 1996.