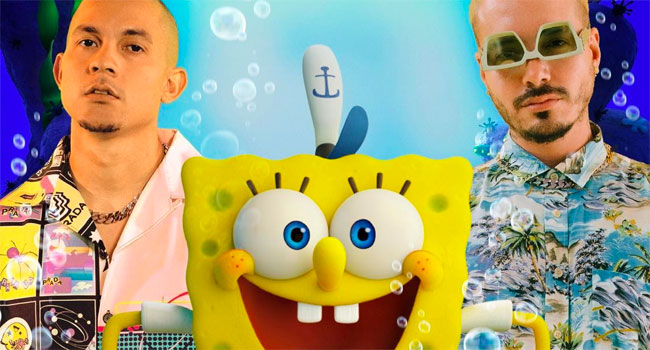 Single is from The SpongeBob Movie: Sponge On The Run

Latin GRAMMY winning producer Tainy and global superstar J. Balvin have reached No. 1 on radio in the United States and Puerto Rico with their global hit “Agua”, earning them the No. 1 spot on Billboard’s Latin Pop, Latin Airplay and Latin Rhythm charts. Radio success comes to no surprise as “Agua” has digitally accrued over 500 million streams combined and has also become a viral hit with the “Agua Challenge” on platforms like Instagram and Tik Tok.

The song is the first single off the upcoming Paramount Animation/Nickelodeon film The SpongeBob Movie: Sponge On The Run’s soundtrack, spearheaded and executive produced by groundbreaking multimedia company NEON16 and award-winning producers ​Tainy and ​Lex Borrero​. NEON16 has curated the official film soundtrack for the next installment in the SpongeBob franchise by bringing together some of the industry’s most prolific and innovative artists to collaborate.

“It’s not everyday that you can collaborate with such a huge brand like the Spongebob franchise is, so to have the opportunity to do so and to see the song have success, it means the world to us. Paramount Animation and Nickelodeon have been great partners in this process and we are excited to share with you the rest of the soundtrack for this incredible feel good film.” comments Lex Borrero, NEON16 President.

The soundtrack, set to be released on ​NEON16/Interscope Records​, will include songs by ​Tyga​, ​Swae Lee​, ​Lil Mosey​, ​Weezer​, ​Snoop Dogg​, ​The Flaming Lips​, ​Kenny G​, ​Cyndi Lauper and more. The SpongeBob Movie: Sponge On The Run, will debut digitally in the U.S via premium video on demand in early 2021 and then move exclusively to ​CBS All Access​, ViacomCBS’ subscription video on demand and live-streaming service, following the Premium Video on Demand window.