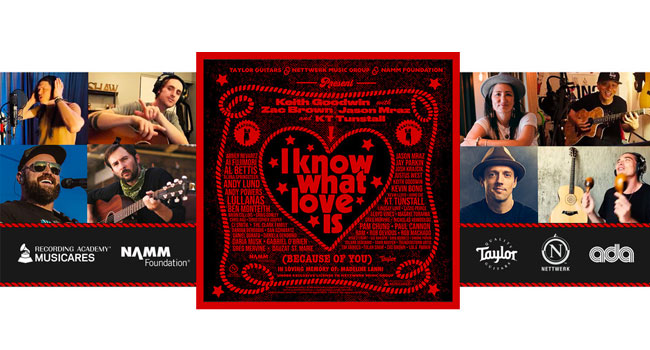 Taylor Guitars has rallied more than 50 of its artists — including Zac Brown, KT Tunstall, Jason Mraz and Keith Goodwin — to form a one-time supergroup for the incredibly catchy original song, “I Know What Love Is.” A philanthropic project that aims to raise money to support members of the music industry whose art and careers were put on hold by the pandemic, “I know What Love Is” will be available January 21st for download and streaming across multiple music platforms, including Apple Music, Spotify and Amazon Music.

The song, written by Keith Goodwin and co-produced by Jay Parkin of Taylor Guitars, and audio engineer Gabriel O’Brien, will also feature a music video with footage of all 50+ artists. Net proceeds from the song will benefit MusiCares, which provides a support system of health and human services for music people across a spectrum of needs including physical and mental health, addiction recovery, hearing clinics, unforeseen personal emergencies, and disaster relief including COVID-19 relief. Taylor has also partnered with renowned music organizations The NAMM Foundation and Nettwerk Music Group to help promote the song and its positive message. Various Taylor artists will give an exclusive live performance of “I Know What Love Is” as part of NAMM’s Believe In Music Week.

One community that has been acutely affected by the COVID pandemic has been the music industry. The suspension of live music performances has created a domino effect, throttling the livelihoods of working musicians, road crews, staff at music venues and many others who contribute to the industry’s ecosystem. The lack of live performances has also amplified the extended sense of social disconnection being felt everywhere.

Yet music has always played an essential role in helping people get through tough times and creating a deeper sense of connection to others and the world around them. According to Keith Goodwin, singer, guitarist and songwriter from the indie folk band Good Old War, that’s exactly the spirit that was channeled when he wrote the lyrics and melody for “I Know What Love Is.” Goodwin’s music was underscored with added poignancy when, soon after the recording of the song, he lost his grandmother, Madeline Lanni, from COVID-19 complications.

“During lockdown one of the most challenging things for me was trying to adapt to not having my friends around to play music with,” states Goodwin. “This project really helped keep me focused on making music when everything else in life had changed so drastically. I’m grateful for this opportunity to connect and collaborate with such great artists and for a good cause. We are all lucky to be able to share our love of music together.”

Goodwin collaborated with Taylor Guitars content producer Jay Parkin and producer/engineer Gabriel O’Brien to bring the song together, mix and master the original skeleton of the song. But after hearing the finished product, they decided that something was missing. In his role as producer, Parkin realized the song could be even bigger.

“We were shooting for a ‘Hey Jude’ meets ‘We Are the World’ vibe,” Parkin explains. “The song itself felt good, but this was always about supporting musicians and bringing people together. Once we started reaching out to the music community and began to get the parts back, we started to see how the pieces all fit together to create an anthem of hope for 2021.”

Goodwin and Parkin drew on their connections to the music industry to enlist dozens of Taylor players for the project, from hobbyists and weekend warriors to touring bands and big-label acts. Each artist was asked to contribute their own version of a piece of the song that spoke to them. Zac Brown, Jason Mraz, KT Tunstall, Chris Conley (Saves the Day), Alana Springsteen and 49 others enthusiastically collaborated via email, creating over 200 tracks recorded in their respective home studios around the world, from Los Angeles and Nashville to Tokyo, responding to the song’s inspiring message of solidarity among the music community during a time of great need. In addition to audio tracks, the artists and performers also captured their parts on video using iPhones and DSLR cameras to create the “I Know What Love Is” music video, a tribute to community, connection, technology and the power of music.

With those contributions in hand, Goodwin, Parkin and O’Brien then spent hundreds of hours working across time zones to assemble, edit, mix and master a new version of the song, this one composed of sounds drawn from musicians across borders and genres.

“So many brilliantly talented crew, venue teams and artists have been financially crippled by the arrival of COVID-19, and hopefully we can ease some of that pain a little through MusiCares,” says KT Tunstall, the GRAMMY-winning Scottish singer-songwriter and musician.

Among the respected music institutions that have joined the effort to promote “I Know What Love Is” and its message of positivity are The NAMM Foundation, a not-for-profit association with a mission to strengthen the music products industry, and Nettwerk Music Group, an organization that connects music fans with music makers. Nettwerk Music Group will release the song and provide promotional support, while The NAMM Foundation will host an exclusive live stream performance at NAMM’s Believe in Music week on January 21st at 9:30 am PST.

“‘I Know What Love Is’ offers a message of hope and resilience that through music is a way forward,” shares Mary Luehrsen, Executive Director of The NAMM Foundation. “While we continue to navigate these times for our industry and society, the gift of music is a wellspring that ripples throughout communities and undoubtedly will help those most in need.”

“I Know What Love Is” will be available to stream and download January 21st, on major music platforms Spotify, Apple Music, Amazon Music and more.