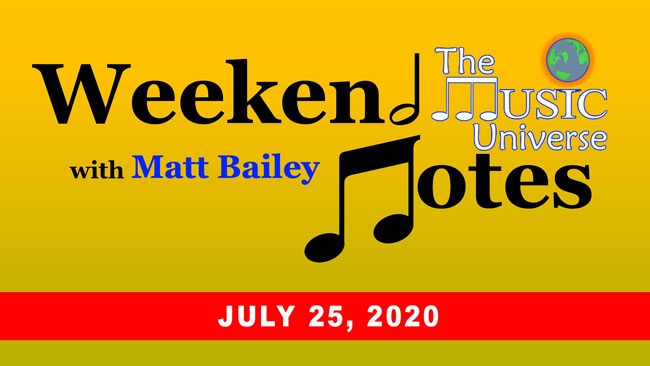 Swift dropped the album at midnight Thursday into Friday

Our top story this week — You can get Taylor Swift’s latest album right now. Swift surprised fans with the release of Folklore at midnight Thursday night. The project features 17 songs and eight unique collectible covers.

KISS has announced the 2021 European dates for their End of the Road Tour that were postponed from 2020 due to COVID-19. The 17 date trek now kicks off June 2nd in Antwerp, Belgium and wraps July 15th in Budapest, Hungary. Additional dates are expected to be announced.

Meanwhile, Luke Combs has canceled all of his dates for 2020. In the announcement, Combs posted the new dates for 2021 and promised fans that tickets for the previously-scheduled shows would be honored. He joins a slew of artists, including Justin Bieber, who have given up on touring in 2020.

Stone Temple Pilots will perform their iconic album, Core, in its entirety for an epic livestream event, next Friday July 31st. Tickets for the livestream are just under ten dollars and are available via nugs.tv. The concert will also be available for 48 hours after the broadcast.

The Rolling Stones have released a previously unheard track called “Scarlet.” It was recorded by the Stones in October 1974. The song features Jimmy Page and Rick Grech. The previously unreleased track follows the huge success and acclaim of “Living In A Ghost Town” and will feature on the upcoming album Goats Head Soup 2020.

Swedish pop superstars ABBA are set to release five new songs in 2021. The foursome was going to release the music this year, but were forced to push it back a year due to the coronavirus pandemic. This, according to Reasons To Be Cheerful podcast co-host Geoff Lloyd, who interviewed the band’s Bjorn Alvaeus via Zoom.

The songs were recorded in 2018 after the group announced its return after a 35 year hiatus. Two songs were set to be released in December 2018, when they announced their hologram tour, but have never seen the light of day.

And finally, The Real Lady A, Anita White is our guest this week on a not-to-be missed episode of The Music Universe Podcast.