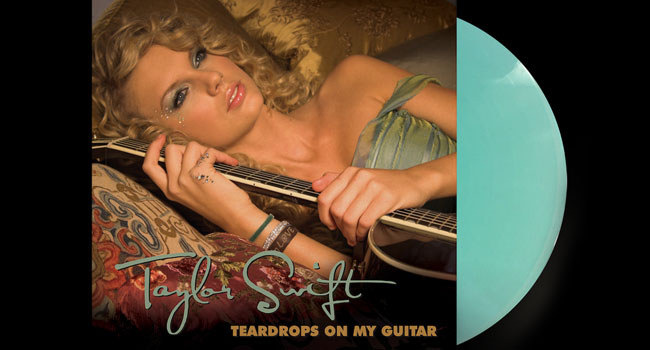 “Teardrops” is the second of the Taylor Swift Vinyl Single Series

Big Machine has announced  it will release a limited edition 7″ vinyl single for Taylor Swift’s “Teardrops On My Guitar” on August 30th. The disc will feature a B-side acoustic recording of the track from 2007 that’s not previously been available on vinyl.

The limited edition, hand-numbered, 7″ vinyl is available for only $10 and is available via Big Machine’s online store.

The single is the second in the series which celebrates Swift’s 13 years of recording history. Her first single, “Tim McGraw,” is also available on 7″ for $10 and will ship on August 16th. Each set is a one-time run production and will not be reprinted once they sell out.

The singer made headlines last week after speaking out about the sale of Big Machine Label Group to music mogul Scooter Braun. Swift penned an open letter on Tumbler saying how “sad and grossed out” she is that Braun, who she claims has bullied her, now owns “my life’s work.” Swift also claims she was never given a proper figure to buy back her masters from the label run by CEO Scott Borchetta.

The letter caused a public battle between the three with Braun’s wife speaking out and Borchetta releasing a statement of his own.

“You were given the opportunity to own your masters, you passed,” Yael Braun shares on Instagram. “Interesting the man you’re so ‘grossed out’ by believed in you more than you believe in yourself. Your dad is a shareholder and was notified, and Borchetta personally told you before this came out. So no, you didn’t find out with the rest of the world.”

Borchetta followed shortly after with a post of his own, including a screenshot of an offer that was made to Swift where she owned everything she ever did for the label.

“I am attaching a few very important deal points in what was part of our official last offer to Taylor Swift to remain at Big Machine Records. Her 13 Management team and attorney Don Passman went over this document in great detail and reported the terms to her in great detail.

“Taylor and I then talked through the deal together.

“As you will read, 100% of all Taylor Swift assets were to be transferred to her immediately upon signing the new agreement. We were working together on a new type of deal for our new streaming world that was not necessarily tied to ‘albums’ but more of a length of time.”