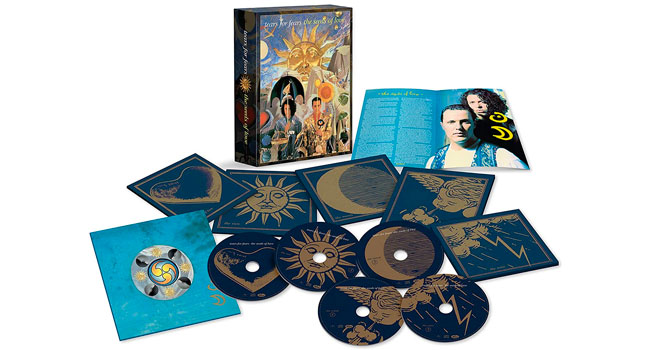 Over 30 years on from its original release, Tears For Fears’ third long-player The Seeds Of Love has taken on mythical status for its scope, ambition, timeless musicality, and the fact that it took over four years to record. For music fans and audiophiles the world over, the album continues to astound with its depth and sheer audacity, which is why three decades on it, has barely aged a day. UMe/Virgin has set a remastered CD, LP, 2 CD Deluxe and 4 CD/Blu-ray Super Deluxe Edition for October 9th.

The Super Deluxe box set fully tells the story of how this extraordinary album came to be. The box set includes 22 unreleased tracks from demo sessions, live jams, studio sessions along with a definitive set of B-sides, and rare mixes. Highlights include demos of “Advice For The Young At Heart” with Roland Orzabal singing lead vocal and “Rhythm of Life,” which didn’t make it onto The Seeds of Love and was later given to Oleta Adams for her Circle of One album. The Blu-ray also features a stunning 5.1 mix by Grammy-nominated artist Steven Wilson.

Coming off the back of the ten million-selling Songs From The Big Chair, The first writing sessions for The Seeds Of Love started when the band was touring in 1985, making use of soundchecks to sketch the outlines of new songs. Over the next four years, Roland and Curt would work with several producers, engineers, and many musicians before finally deciding to produce the album themselves with assistance from their Songs From The Big Chair engineer Dave Bascombe.

A key person in the making of the album was pianist and singer Oleta Adams, who Roland and Curt had seen play in the bar of their hotel while touring in 1985. She joined the recording sessions in early 1988 along with world-class session players such as drummer Manu Katché and bass player Pino Palladino and would play a massive part in songs such as “Woman In Chains” and “Badman’s Song.” These sessions in 1988 are perhaps the most fascinating tapes unearthed for the boxset. These jams took place at London’s Townhouse studio, and disc four contains around 30 minutes edited down from over 24 hours of unadulterated in-the-studio live performance, exactly as it was performed at the time, complete with chatter, some laughter, and no overdubs. These jams include very different versions of “Woman in Chains,” “Badman’s Song,” “Standing On The Corner Of The Third World,” and “Rhythm of Life.”

While the band was pleased with these sessions, there was still at least another year of further recording, overdubbing, editing, mixing, tweaking and discussion, before the final mix was finished in New York in the summer of 1989.

All of the efforts that went into the making of The Seeds Of Love certainly paid off as it is now hailed as a classic of the time, alongside albums such as Talk Talk’s Spirit Of Eden. The Seeds Of Love was released in the ‘80’s, but it remains anything but an “80’s album.”