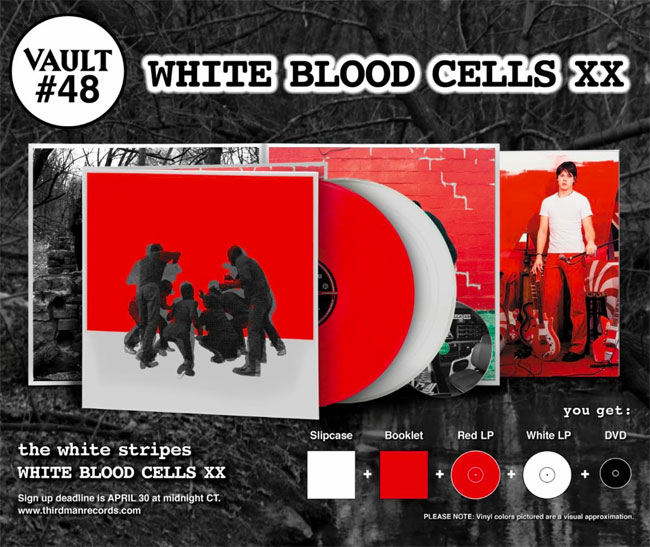 In February 2001, Jack and Meg White hopped into their trusty Dodge van and made their way down south to Easley-McCain Recording in Memphis, Tennessee. Inspired and electrified by their recent overseas touring and the increasingly rabid reaction to their live performances, the White Stripes would, for the first time, record an album outside of their hometown Detroit. Interviews at the time had Jack postulating that the record might stretch to a double LP length and while that didn’t happen, the fruit born from the sessions proved markedly unique in the band’s canon.

For a band widely defined by its self-imposed rules, the strictures employed on White Blood Cells (while seemingly overlooked by the general public) are largely responsible for its breakthrough nature. No blues, no guitar solos, no guest musicians, no cover songs, no bass. Think about that and let it sink in. All of these elements are used extensively across just about every other studio recording across the Stripes entire career. But as an attempt to deviate from the profile of De Stijl the previous year, these guidelines would help carve out this work of incredible stature.

To celebrate the 20th anniversary of the release of White Blood Cells, Third Man Records is privileged to release White Blood Cells XX, the companion to the White Stripes’ universally acknowledged 2001 album.

Disc one contains 13 tracks, all of which are previously unreleased. Building from the ground up, we hear embryonic demos of “Dead Leaves and the Dirty Ground” and “Offend In Every Way” coupled with songs never previously released in any form, from the full-band studio take on “That’s Where It’s At” (a tune that would later evolve into “I Think I Smell A Rat”) through skeletal sketches of “Oooh-Ahh” and “Feel Like I’m Three Feet Tall” songs both of which would be abandoned entirely. Early Easley mixes of “The Union Forever” and “I Can’t Wait” sit alongside alternate takes of tasty gems like “Fell In Love With a Girl” and “This Protector.” The end result is an LP that provides the unheard work-in-progress nuggets that fans have come to cherish from Vault deep dives. Pressed on red vinyl because the kids love it.

Disc two is a previously unreleased live recording from Headliner’s in Louisville, Kentucky. Recorded on September 6th, 2001 the band is captured mid-stride, having already played approximately 75 shows that year. Killer romps on “Truth Doesn’t Make a Noise” and “Expecting” pair beautifully with refreshing takes on “Boll Weevil” and “The Same Boy You’ve Always Known.” Utilizing audio straight from the soundboard and pressed on pristine white vinyl at Third Man Pressing in Detroit, this disc is yet another shining example as to how spectacular the Stripes were on stage.

Tagging along on the February 2001 trip to Memphis was upstart photographer David Swanson. During the sessions, Swanson was tasked with documenting the happenings. The true treat of this Vault package is the hour-long, cinema verite behind-the-scenes peek at the White Blood Cells recording process at Easley-McCain Recording. Unseen by anyone in the past two decades, this treasure offers a heretofore unprecedented glimpse behind the curtain revealing how some of your favorite White Stripes songs came to be.

Additionally, as with previous XX Vault releases, the package comes with a 12” x 12” full-color booklet, chock full of rare posters and flyers, unseen photos, shoulda-been thrown away scraps, aura images, broken promises, bruised egos and anything else that could reasonably be depicted on the printed page.