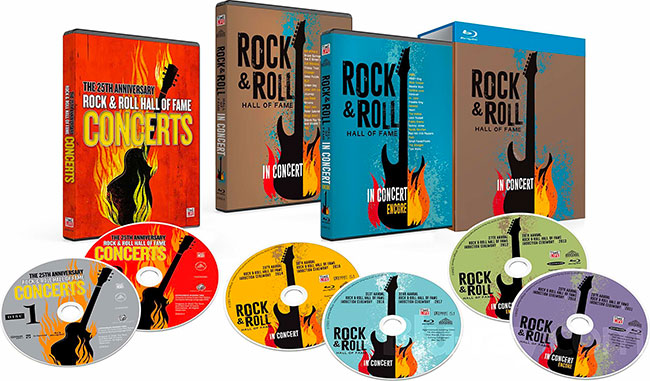 For more than 30 years, The Rock & Roll Hall of Fame has honored rock music’s greats during annual prestigious black-tie ceremonies which have become nearly as epic as the artists they celebrate. Featuring the biggest names in classic rock from the ’60s, ’70s and ’80s, as well as once-in-a-lifetime collaborations that can only happen at these very special events, The Rock & Roll Hall of Fame: In Concert – The Blu-ray Collection is the biggest and best video music collection Time Life has ever produced.

Rock & Roll Hall of Fame: In Concert – Encore features 44 iconic performances from the 2010, 2011, 2012, and 2013 induction ceremonies. Among the highlights include the legendary Canadian power trio Rush performing fiery classics “Tom Sawyer” and “The Spirit of Radio” for their fervent fans; Red Hot Chili Peppers leading a searing all-star jam session of “Higher Ground” anchored by Slash and Ron Wood; Heart going “Crazy on You” before being joined onstage by fellow members of Seattle rock royalty from Pearl Jam and Alice in Chains; Alice Cooper ripping into ferocious versions of “Eighteen” and “Under My Wheels” before closing the set with Rob Zombie on “School’s Out”; The Hurdy Gurdy Man Donovan is joined onstage by John Mellencamp for a chilling performance of “Season of the Witch”; Hall of Fame induction speeches including Don Henley inducting Randy Newman and Neil Young inducting Tom Waits.

The 25th Anniversary Rock & Roll Hall of Fame Concerts — On October 29th and 30th, 2009, rock n’ roll royalty held court at Madison Square Garden for what has been called “the mother of all concerts.” Featuring a who’s who of rock from the ’50s to the ’90s, the concerts, as always, included artists performing together in unprecedented combinations that will most likely never be witnessed again. Highlights include Mick Jagger and Fergie in a blistering version of the Stones’ classic “Gimme Shelter,” with U2; Bruce Springsteen and Billy Joel on-stage for a rollicking rendition of “Born to Run”; Sting joins Jeff Beck for the Curtis Mayfeld classic “People Get Ready”; Paul Simon, David Crosby and Graham Nash join together for a spine-tingling “Here Comes the Sun”; Ozzy Osbourne sings with Metallica on the Black Sabbath classics “Iron Man” and “Paranoid’; and John Fogerty & Bruce Springsteen share vocals on Roy Orbison’s “Oh, Pretty Woman.”