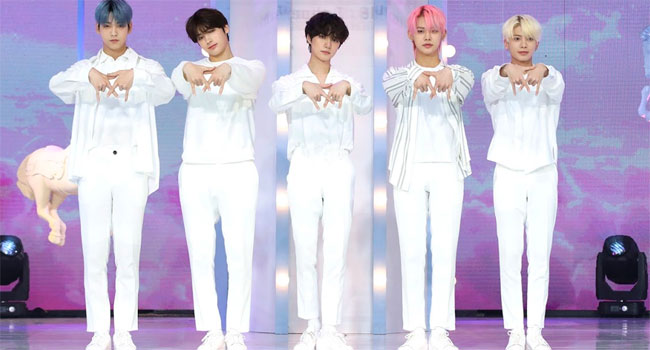 K-pop’s fourth generation ‘It’ group Tomorrow X Together will release their second studio album called The Chaos Chapter: FREEZE, on May 31st via Big Hit Entertainment. Soobin, Yeonjun, Beomgyu, Taehyun and Hueningkai return with an expansive and in-depth musicality for the new “Chaos Chapter” series.

TOMORROW X TOGETHER made their debut in March 2019 and has proved themselves as global super rookies as the forefront of the K-Pop scene, claiming a total of ten Rookie Awards. Widely recognized for their high-quality content and impeccable performances, TOMORROW X TOGETHER is once again prepared to take the world by storm with the release of Still Dreaming.

TOMORROW X TOGETHER received global attention even before the release of their Korean debut mini-album The Dream Chapter: STAR in March 2019. Upon its release, the mini-album topped the charts at No. 1 on iTunes’ Top Album chart in 44 countries and regions and went to No. 140 on the Billboard 200 in the U.S. In addition, the music video for “Crown” achieved 10 million streams in just 13 hours and exceeded 14.49 million streams 24 hours after its release, which is the fastest record among new artists debuting in 2019. As of February 15, 2020, the video now has more than 100 million views.

Their debut full-length Korean album Dream Chapter: MAGIC also went to No. 1 on iTunes’ Top Album chart in 25 countries and regions and the music video for its lead track, “9 and Three Quarters (Run Away),” has already exceeded 65 million streams (as of Nov 25, 2020).

TOMORROW X TOGETHER’s last mini-album minisode1 : Blue Hour reached 300K in physical sales in the first week of release, hitting No. 1 on Billboard’s Top Album Sales chart and debuting at No. 25 on the Billboard 200 in the U.S.. The EP also placed No. 19 on Rolling Stone’s Top 200 Albums Chart. The new ranks mark career milestones for the group, coming on the heels of previous accolades including reaching No. 1 on Billboard’s Emerging Artist chart.

TOMORROW X TOGETHER (“tomorrow by together”) has come together under one dream in hopes of building a new tomorrow. The quintet is full of bright and playful energy, where each member is different from one another, shining in their own way to create synergy. In just two months of their debut, TOMORROW X TOGETHER successfully sold out their first US showcase tour in six cities with their debut album The Dream Chapter: STAR. Emerging as one of K-pop’s most highly-acclaimed acts, the global super rookies have already won Best New Artist accolades on various award shows and received nomination in 2019 & 2020 MTV Video Music Awards’ Best K-Pop category.