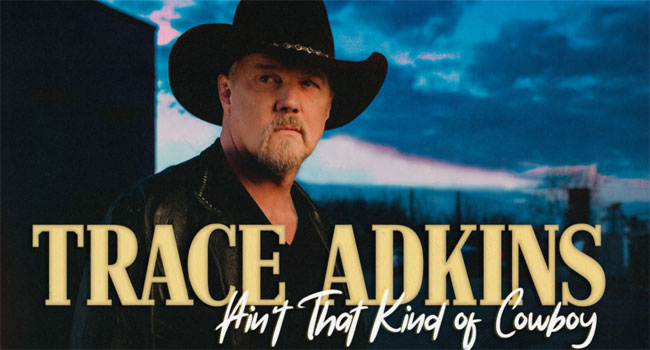 With over 11 million albums sold, country icon Trace Adkins is announcing a new EP, Ain’t That Kind of Cowboy, set for release October 16th, via Verge Records, with his new song, “Just The Way We Do It.” Autographed copies of the EP in addition to exclusive new merchandise items are available in the Official Trace Adkins online store.

The follow-up to 2017’s Something’s Going On, Adkins went into the studio with producer Bart Butler for Ain’t That Kind of Cowboy, cutting six tracks including recently released “Mind on Fishin’” and “Better Off.”

“It was great to work with Bart and Mickey Jack (Cones) on these handpicked songs from some of my favorite writers,” shared Adkins. “I’m really proud of these songs and looking forward to what’s to come.”

“We released Trace’s first two songs on Verge starting in March of this year,” adds President and COO of Verge Mickey Jack Cones. “Those songs have garnered millions of streams and views in just four short months – more than any songs in his career in that span of time – proving what we already knew. There is a huge demand for Trace Adkins’ music! This EP is an answer to that demand and is sure to leave the listeners wanting more. Get ready…it’s coming!”

Written by Jeffrey Steele, Danny Myrick, Kip Raines and Bart Allmand, “Just The Way We Do It” delivers a summertime anthem as Adkins imparts: “Well that’s alright/Get ya some ribs/Wash it on down with a couple of beers/Ain’t nobody getting hurt, don’t be scared/That’s just the way we do it ‘round here.”

“Just The Way We Do It” follows the release of “Mind on Fishin,’” featuring a music video starring T. Graham Brown, and first single “Better Off. ” “Better Off” has garnered over eight million streams since its release in mid-March, with a video premiere on Viacom/CBS Times Square billboards, CMT, CMT Music and CMT.com.