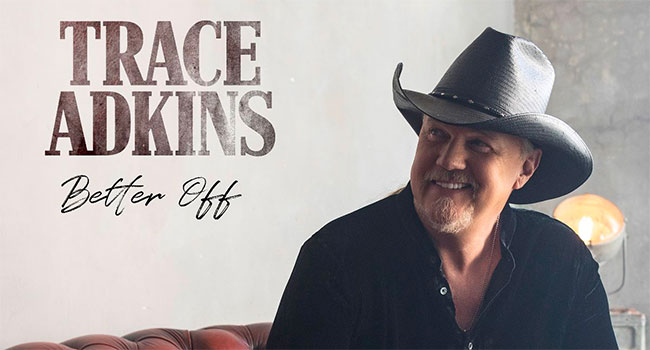 With over 11 million albums sold and a new album on the horizon, country music icon Trace Adkins releases new song “Better Off,” accompanied by a music video premiering on Viacom/CBS Times Square billboards, CMT, CMT Music and CMT.com. The video is set to air in Times Square at 1 pm and 6 pm ET and on CMT during the 6 am and 8 am ET hours.

“I wanted to do a performance style video where I could use my band, so we started there,” Adkins shares with CMT. “[Director] Mike Stryker suggested using the dancers to add some elegance. The fact that the dancers also happen to be a couple added authenticity to their scenes.”

“Better Off,” produced by Bart Butler, serves as the first release on Adkins’ new label Verge Records and was written by Hillary Lindsey, Corey Crowder and Liz Rose.

Adkins’ new tour, The Way I Wanna Go Tour 2020, is scheduled to kick off April 15th in Lancaster, Pennsylvania, but no word as to any postponement due to the COVID-19 restrictions, as of press time. He was recently seen on Blake Shelton’s Heroes & Friends 2020 tour with John Anderson and the Bellamy Brothers, which was cut short last week due to the worldwide pandemic.