Travis Scott drops 'Highest In The Room' | The Music Universe 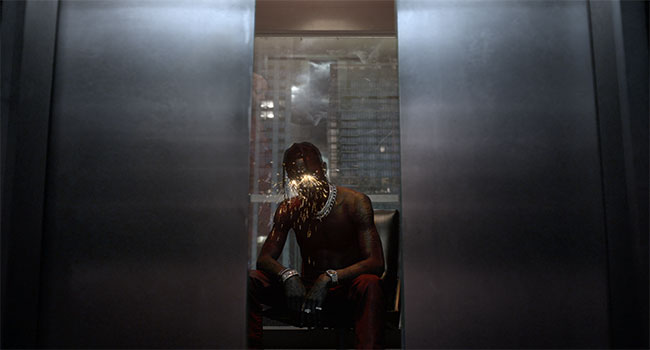 Once again, “Highest In The Room” sees Scott take flight. He vaults from hypnotic highly quotable verses towards an intoxicating, irresistible, and infectious refrain — “I’m the highest in the room. Hope I make it out of here” – on par with his biggest anthems. It sees him level up to new heights altogether.

The blockbuster music video expands his world. It opens on Scott topping a towering skyscraper as he swallows the camera. Overseeing a sweeping skyline, the star walks the exposed metal framework of the building before battling cyborgs intercut with sexy and stirring sci-fi visuals.

It’s unlike anything he’s ever dropped.

The track is available digitally as well as a CD single, 7″ single and cassette single, each with three different cover options. Prices range from $7-$12 in Scott’s online store.

In celebration of “Highest In The Room,” Scott teamed up with Postmates to introduce the “Travis Scott Collection.” Fans may order from his personal favorite restaurants across Houston and L.A. when they’re “the hungriest in the room.” Selections include Jamba Juice, Shake Shack, and Chipotle — each boast a menu curated by the legend himself.

Most importantly, “Highest In The Room” sets the stage for the impending arrival of his highly anticipated fourth full-length and the most anticipated record of the year.