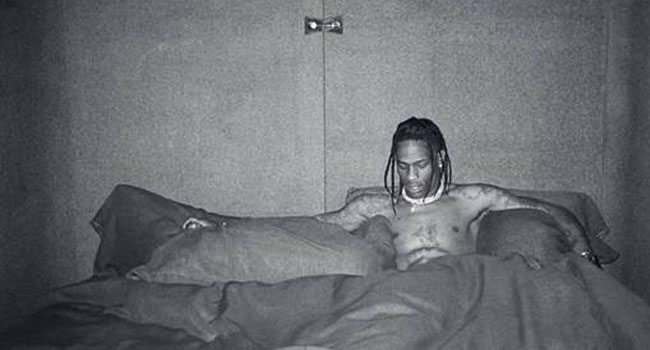 Under the leadership of Editor-in-Chief Alastair McKimm, i-D’s first print offering of 2021, “The Utopia in Dystopia Issue,” will focus on the stories around the people, places and voices that inspire i-D. The issue looks to the future, to creating our own utopia during these dystopian times, and looks to the reconnection and the creative renaissance that will emerge after the upheavals of 2020.

To celebrate the launch, i-D have teamed up with Travis Scott to launch a limited edition i-D x Cactus Jack capsule merch collection, featuring a range of hoodies, t-shirts and a beanie. The collection features Spike Jonze’ signature scrawl, alongside a portrait of Scott and the cities dear to both Travis and i-D – Houston, Los Angeles and London. The merch collaboration will be available in a limited run via travisscott.com and i-D’s online store.

Scott promoted the new merch line with a special 12 hour i-D x Cactus Jack pop-up newsstand in West Hollywood on Tuesday (Feb 23rd) that drew a massive crowd. According to TMZ, the rapper was on hand for the launch, but was escorted out of the area by security after an unknown period of time due to fans storming Scott for autographs. Law enforcement is now investigating the gatheringinvestigating the gathering for possible action against the rapper after it was held without a permit due to COVID restrictions.

In just over a decade, the 28-year-old Houston native – born Jacques Bermon Webster II – has gone from university dropout to his generation’s undisputed leader. As millions of fans around the world feverishly wait for his next album Utopia, Scott opens up to Robert Rodriguez, the acclaimed director behind From Dusk Till Dawn and Sin City about creating the year’s most anticipated album, keeping a collaborative spirit during dystopian times and how fatherhood has changed his life for i-D’s spring cover story.