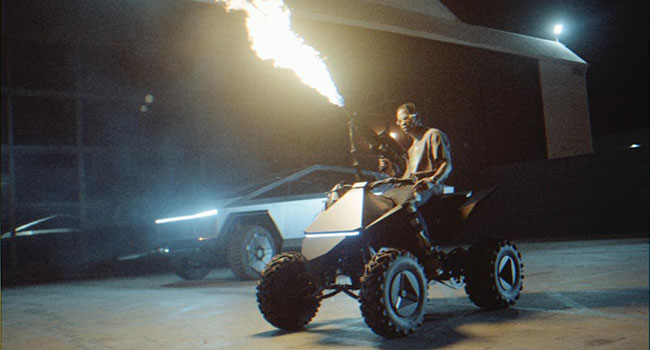 Travis Scott is celebrating the debut pack from his Cactus Jack creative collective, Jackboys, short film and official video for “Gang Gang” featuring Sheck Wes. Both clips were directed by Cactus Jack & White Trash Tyler and features the Tesla Cybertruck. Scott is the first person besides Tesla CEO, Elon Musk, to be seen with the coveted vehicle.

For the pack, Scott invited Cactus Jack Records signees Sheck Wes, Don Toliver, and artist and DJ Chase B to build a body of work based on their longstanding musical bond. The album features the No. 1 Billboard Hot 100 song “Highest In The Room” as the lead single. “Highest in the Room” racked up 59 million streams in it’s first week, marking the modern icon’s first new music since the arrival of his double-platinum history-making 2018 No. 1 opus, ASTROWORLD.

Some artists make history. Six-time GRAMMY® Award-nominated artist, designer, style icon, ASTROWORLD Festival curator, and Cactus Jack record label founder Travis Scott makes culture. Among dozens of multi-platinum certifications and nearly 17 billion streams since 2012, he delivered three chart-topping full-length albums-the platinum Rodeo [2015], platinum Birds in the Trap Sing McKnight [2016], and triple-platinum ASTROWORLD [2018]. The latter emerged as “The Second Largest Debut Album of 2018” and achieved the “Biggest Sales Week of 2018.” Proclaimed one of the “Songs That Defined the Decade” by Billboard, the seven-times platinum single “Sicko Mode” became “the first hip hop track to spend at least 30 weeks in the Top 10 of the Hot 100.” It earned GRAMMY Award nominations in the categories of “Best Rap Performance” and “Best Rap Song” as ASTROWORLD garnered a nod for “Best Rap Album.” Beyond guesting on Ellen and The Tonight Show Starring Jimmy Fallon, he starred in the Netflix documentary, Look Mom I Can Fly.

A groundbreaking designer sought after by everyone from Nike to Ksubi Denim and Helmut Lang, he smashed the record for “Most Merchandise Sold in a Week,” moving one million units to date. He performed at Super Bowl 2019 and landed on President Barack Obama’s personal playlist. As of 2019, his annual ASTROWORLD Festival holds the distinction of being “the largest single-day artist-curated music festival in the country” in addition to hosting Dave Chapelle, Kanye West, Marilyn Manson, Rosalía and more.