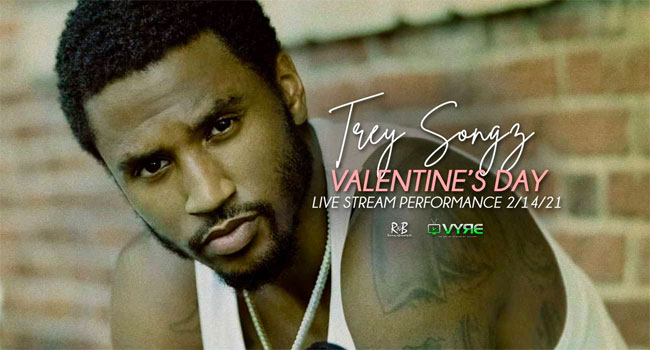 While the virtual show’s production will take place in Los Angeles, LiveXLive will allow fans and couples alike to experience this intimate show as if they were in attendance. Ranging from live performances to exclusive interviews to behind-the-scenes footage, fans will get an all access look from start to finish with the multi-Grammy nominated artist. Ticket pricing begins at $19.99 at LiveXLive.

“As an artist driven company, working closely with talent like Trey Songz in creating unique content provides fans with an authentic connection and experience,” says Roe Williams, LiveXLive’s recently appointed Global Head of Talent and Artist Relationships. “Through this PPV virtual concert, which includes intimate interviews, real-time interactive fan engagement, virtual merch and more, we are able to deliver a strong moment in music for this Valentine’s Day special.”

Trey Songz stormed the music scene in 2005 with hits like “I Gotta Make It”, followed by a series of charting singles “Can’t Help But Wait,” “Heart Attack,” and even helped Drake launch his career when they paired up in 2009 for “Successful.” The Atlantic Records artist then released his third album Ready in 2009 with “Say Aah”, peaking at No. 9 on the Billboard Hot 100 making it Trey Songz’s first Top 10 Hit accompanied by a GRAMMY nomination for Best Male R&B Vocal Performance. The following year saw Trey Songz’s highest charting song to date, “Bottoms Up” featuring rapper Nicki Minaj from his fourth studio album, Passion, Pain & Pleasure. In 2012, Trey Songz released his first No. 1 album, Chapter V, which debuted atop the Billboard 200. The album’s lead single titled “Heart Attack” gave Trey Songz his second GRAMMY nomination. Following that Trey Songz released his sixth studio album Trigga in 2014, his seventh studio album Tremaine in 2017, and his eighth studio album Back Home in 2020. Trey Songz has sold over 25 million records worldwide with a handful of top charting singles making him a household name and an artist enjoying the longevity of his talents.