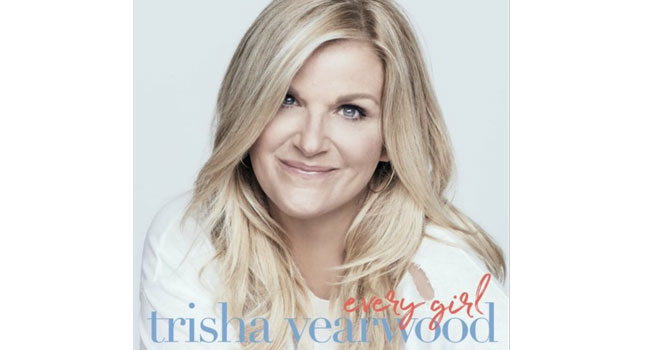 As the history-making lead single “Every Girl In This Town” continues to heat up airwaves and streaming platforms, three-time GRAMMY Award-winning country superstar Trisha Yearwood unlocks the pre-order for her anxiously awaited upcoming album, Every Girl. It arrives in stores and at all digital services on Friday, August 30th.

Additionally, the imited Edition, featuring special cover art in vinyl and CD, will be available for pre-order on her official Talk Shop Live channel for a limited time. Yearwood will reveal the limited edition cover and discuss the album live on Talk Shop Live today (Fri, June 28th) at 6 pm ET/3 pm PT.

Increasing anticipation, she teamed up with CMT to premiere the music video for “Every Girl In This Town.” Bringing audiences closer to the superstar, the visual threads together a cinematic and compelling narrative illustrative of the track’s empowering message and spirit.

She excitedly reveals the track listing for Every Girl as well. Once again, Yearwood enlisted the talents of longtime producer Garth Fundis behind-the-board. Together, they maintain a creative partnership that dates back to her double-platinum classic self-titled 1991 debut, and it flourishes once again on these 14 songs.

Plus, she welcomes a powerhouse cast of collaborators into the fold. The album includes songs such as the soaring and sweeping “Tell Me Something I Don’t Know” featuring Kelly Clarkson, the heartfelt ballad “What Gave Me Away” featuring Garth Brooks, and elegant closer “Love You Anyway” featuring Don Henley. As an avowed Linda Ronstadt fan, she reached out to songwriter Karla Bonoff for a collaboration and ended up recording an emotionally charged take on “Home” — originally cut by Bonnie Raitt. Handpicked by Yearwood, the record notably showcases the talents of a bevy of female writers such as Lucie Silvas, Caitlyn Smith, Patricia Conroy, Ashley McBryde, Gretchen Peters, and more.

“I approached this album without any pressure or expectations,” she comments. “I’m so grateful the songs were there. I found 14 tunes I couldn’t live without. You want people to recognize you as an artist, but you also want to take them somewhere they haven’t necessarily been with you before. With the freedom of no expectations, I got back to that feeling I felt on my first album, like I have to do this and put it out there. Over the years, I let go of worrying about perfection. I just wanted to have a good time. I realized maybe that’s when you do your best work.”

This fall, she launches her first solo tour in five years. The Every Girl On Tour kicks off October 3rd with a special three-night engagement with the Nashville Symphony at Schermerhorn Symphony Center. The 22-city trek continues throughout the United States with stops in New York, Boston, Atlanta, Chicago, St. Louis, Cincinnati, Cleveland, Fort Worth, Minneapolis and Jacksonville. Tickets are on sale now at trishayearwood.com/tour.

Every Girl stands out as the artist’s first full-length country record since 2007’s critically acclaimed Heaven, Heartache and the Power of Love and follows on the heels of the 2019 Frank Sinatra homage, Let’s Be Frank. Trisha previously joined forces with Garth Brooks on his 2014 – 2017 sold out world tour.

Earlier this month, Yearwood had a history-making return to country radio with “Every Girl In This Town.” With 84 total adds, it marks the singer’s highest debut and biggest add day of her career. The hit song is “Billboard’s Highest Female Debut of 2019” on the Country Airplay Chart, coming in at No. 21, and the No. 4 Highest Billboard Country Radio Debut in 2019. It was also Billboard’s No. 1 Greatest Gainer on the Country Airplay Chart for the week. Mediabase reports the second Highest Female Debut and eighth Highest Debut All Country of 2019.