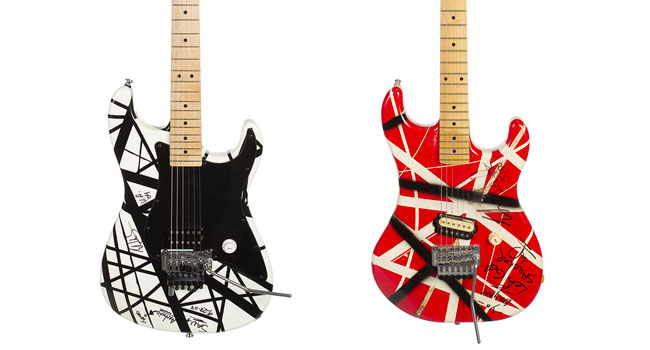 Two guitars played and built by EVH up for auction

Julien’s Auctions has announced that two of Eddie Van Halen’s most iconic guitars will take the stage of Icons & Idols Trilogy: Rock ‘N’ Roll, the world-record breaking auction house to the stars’ annual music extravaganza on Friday, December 4th and Saturday, December 5th live at Julien’s Auctions in Beverly Hills and online at juliensauctions.com. One of rock music’s most influential guitar legends of all time headlines an all-star lineup featuring hundreds of artifacts and memorabilia owned and used by some of the world’s greatest music artists of all-time including Kurt Cobain, Elvis Presley, Michael Jackson, Madonna, Lady Gaga, David Bowie, Aerosmith and more.

Eddie Van Halen thrilled audiences with his virtuosic and electrifying guitar playing on his stripe designed electric guitars in his high energy performances while flying through the air. At center stage of this auction will be two of these important guitars custom designed and played by the lead guitarist and co-founder of the American rock band Van Halen.

Van Halen hand striped this 2004 EVH Charvel Art Series electric guitar with maple neck and fingerboard, Fender Stratocaster-style headstock numbered on the back #54, in the unique white and black abstract design in the style of his 1978 Van Halen I guitar. The front of the body is signed Eddie Van Halen, initialed VH 04 and inscribed in Van Halen’s hand San Antonio Texas / 9-28-04. This guitar also features an EVH humbucker pickup with evidence of a cigarette burn to the front. Accompanying the guitar are multiple photos of Van Halen hand-applying taped stripes to the guitar, photos of him playing the guitar on stage in San Antonio and an EVH hardshell case with a partly-smoked cigarette in a plastic vial. The EVH Charvel Art guitars are a limited-edition series of guitars inspired by Eddie Van Halen’s most famous guitars where each one has a unique body, designed by Van Halen himself.

A customized electric guitar serial number F 0024 built by Van Halen with his guitar tech Matt Bruck at the guitarist’s 5150 home studio is another unique and personal favorite from the rock legend. Featuring a red body with white and black stripes designed and applied by Van Halen, the guitar features a maple neck and fingerboard with dot inlays, pointed Kramer headstock with Kramer machine heads, single humbucker pickup and Floyd Rose tremolo (seen in photo right). In 1991, the guitar was gifted to Van Halen’s close friend Bryan Cash, the owner of Cash’s Centenary Oyster House in Shreveport, LA. It is inscribed Yo – / Bryan / Let’s get / shucked / up / Eddie Van Halen / 5150 and was displayed at the bar where it was played by Van Halen when he visited. The guitar also includes a white Van Halen guitar pick and 2 backstage passes, one labelled Bertinelli Guest. Both guitars are estimated to sell each between $40,000 – $80,000.

Van Halen, with lead guitarist Eddie Van Halen, his brother and drummer Alex Van Halen, bassist Michael Anthony and singer David Lee Roth, shot to rock superstardom soon after the release of their 1978 self-titled debut album. Van Halen dominated the music charts throughout the ‘80s with their classic hits, “Runnin’ with the Devil,” “Unchained,” “Hot for Teacher,” “Panama” and “Jump” and played to sold out arenas around the world throughout the decade and into the ‘90s with singer Sammy Hagar. From his star making guitar solos on Van Halen’s “Eruption” to his now iconic contribution to Michael Jackson’s “Beat It,” the charismatic songwriter and musician is deified as one of the greatest guitarists in rock history and is worshipped by legions of fans, fellow musicians and critics alike. Van Halen was inducted into the Rock & Roll Hall of Fame in 2007. The beloved pop culture icon died on October 6th at the age of 65 after a long battle with cancer.

“As we were preparing for our annual Icons & Idols: Rock and Roll auction lineup, we were stunned to hear the sad news of Eddie Van Halen’s passing last week,” states Darren Julien, President/Chief Executive Officer of Julien’s Auctions. “We are honored to include at this event two iconic guitars from his brilliant and blazing career as one of rock’s greatest and most gifted guitar heroes. His instruments join their rightful place among other rock royalty items from Kurt Cobain, Michael Jackson, Aerosmith and many others we look forward to announcing in the coming weeks.”

Other auction highlights include: Kurt Cobain’s stage played and smashed black Fender Stratocaster guitar used on Nirvana’s 1994 In Utero Tour and gifted by the grunge icon to an audience member after their performance at the Palais Omnisport de Rennes in Rennes, France, on February 16, 1994 (estimate: $60,000 – $80,000) (photo left); Michael Jackson’s white nylon right-hand glove with a silver-tone metal hook, entirely adorned with hand-sewn Swarovski crystals used by The King of Pop onstage throughout the historic Victory tour where all six Jackson brothers performed together as The Jacksons (estimate: $50,000 – $60,000); Lady Gaga’s black Kaimin PVC jacket worn in the promotional video and photoshoot for her makeup brand, Haus Laboratories (estimate: $4,000 – $6,000); Aerosmith’s 1993 MTV Video Music Award Moonman for the Viewers’ Choice Award for the single “Cryin’,” (estimate: $10,000 – $15,000) (photo below); David Bowie’s U.S. Tour IV manuscript from his 1974 Diamond Dogs tour that contains lyrics to his songs performed on the tour and filled with handwritten notes by Bowie for the sound engineer about the instrumental pickups, breaks, chorus and guitar solos (estimate: $20,000 – $30,000); a vintage nude cocktail dress with silver vermicelli beads worn by Madonna to the premiere of Who’s That Girl in New York on August 6, 1987 and later worn by actress Daryl Hannah to the 1988 Academy Awards in Los Angeles (estimate: $20,000 – $30,000); Elvis Presley’s black cotton macrame Zodiac signs belt worn in many photographs and on the cover of the June 1972 issue of Screen Stars magazine (estimate: $30,000 – $40,000); and more to be announced.

Registration is required to bid in this online auction and can be done in person at the exhibition, or online before the sale at the Juliens Auctions Registration page to bid by phone, proxy or in person, or online at JuliensLive.com to bid live online, or by calling (310) 836-1818.

In 2020, Julien’s Auctions received its third Guinness Book of World Record placement for the sale of Kurt Cobain’s “MTV Unplugged” 1959 Martin D-18E acoustic-electric guitar, which sold for $6 million making it the world’s most expensive guitar ever sold at auction. Based in Los Angeles, Julien’s Auctions has a global presence bringing their auctions and exhibitions to targeted destinations worldwide including London, New York, Las Vegas, Japan and China. Live auctions are presented for bidders on-site and online via live streaming video and mobile technology.