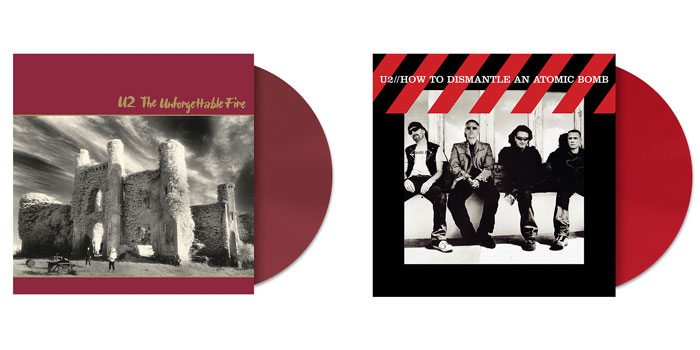 Interscope Records/UME have released two new colored vinyl reissues from U2. Pressed on 180-gram vinyl, The Unforgettable Fire (1984) and How To Dismantle An Atomic Bomb (2004) are available June 7th with Zooropa and a 30th anniversary The Joshua Tree gold reissue available on June 14th.

The Unforgettable Fire is remastered and pressed on 180-gram limited edition wine colored vinyl, to match the color of album’s iconic artwork. The set includes a 16 page booklet with lyrics.

Released nearly 35 years ago in October 1984, The Unforgettable Fire is the fourth studio album from U2. Recorded at Slane Castle and Windmill Lane Studios in Ireland, it was the first U2 album to be produced by Brian Eno and Daniel Lanois. The album’s lead single “Pride (In The Name Of Love)” not only delivered the band its biggest hit at that time, the song has become the most frequently played live number in the U2 repertoire. A staple of best album lists and essays by fans, critics and fellow artists, The Unforgettable Fire is hailed as U2’s first sonic reinvention, and remains among the band’s most beloved works with classic cuts such as “Bad,” “A Sort of Homecoming” and the title track.

How To Dismantle An Atomic Bomb is pressed on 180-gram limited edition red vinyl. The set includes a 16 page booklet with lyrics.

Released in November 2004, How To Dismantle An Atomic Bomb is the eleventh studio album from U2. Recorded in the band’s studio at Hanover Quay, Dublin and in the South of France, HTDAAB was produced with long-time U2 collaborator Steve Lillywhite, with additional production from Chris Thomas, Flood, Jacknife Lee, Brian Eno, Daniel Lanois, Nellee Hooper and Carl Glanville. The record reached No. 1 in the album charts of 30 plus countries around the world, including the U.S., Canada, the UK and Ireland, and featured hit singles “Vertigo,” “All Because Of You” and “City Of Blinding Lights.” How To Dismantle An Atomic Bomb was awarded a total of nine GRAMMY Awards, including the band’s second Album of the Year win.

Zooropa is the eighth studio album by U2. Produced by Flood, Brian Eno, and The Edge, it was released on July 5, 1993 on Island Records. Inspired by the band’s experiences on the Zoo TV Tour, Zooropa expanded on many of the tour’s themes of technology and media oversaturation. The record was a continuation of the group’s experimentation with alternative rock, electronic dance music, and electronic sound effects that began with their previous album, Achtung Baby, in 1991.

On U2’s 1987 album The Joshua Tree, the band shifted away from the ambient experimentation of their 1984 release The Unforgettable Fire and applied a harder-hitting sound to tighter song structures. The album is influenced by American and Irish roots music, and through socio-politically conscious lyrics embellished with spiritual imagery. It features some of the band’s biggest and most enduring hits, including “Where The Streets Have No Name” and “With or Without You.”