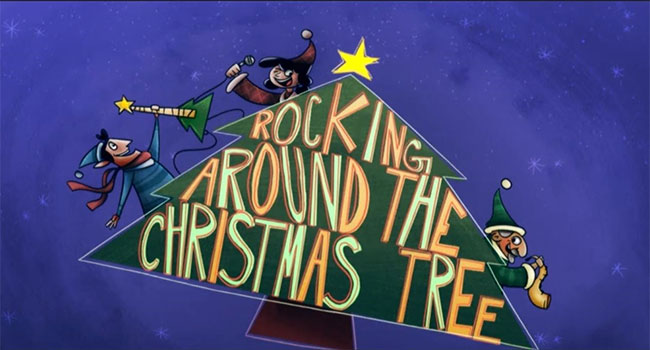 Classic songs from Bobby Helms, The Jackson 5, Brenda Lee and The Surpemes among those brought to life with first official music videos

This holiday season some of the most well-known holiday songs will receive the gift of their first-ever official music videos. UMe, Universal Music Group’s global catalog company, has partnered with legendary artists and estates to create vibrant new visuals for songs that have never before had a video.

UMe has partnered with legendary artists and estates to bring eight iconic Christmas songs to life in a new way with a series of newly-created animated videos. The vibrant new visuals are for songs that have never before had a video, including evergreen staples from Brenda Lee, Bobby Helms and Burl Ives; yuletide favorites from Frank Sinatra and Dean Martin, and soulful holiday from The Jackson 5, The Supremes and The Temptations.

“We are especially excited for the holidays this year, with a series of newly-created animated videos for some of UMG’s most iconic Christmas songs,” says Bruce Resnikoff, President and CEO of UMe. “This year we are bringing eight of the biggest holiday songs ever recorded to life with first-ever official music videos. There are beloved seasonal staples from Brenda Lee, Bobby Helms and Burl Ives; favorites from Rat Packers Frank Sinatra and Dean Martin; and soulful Christmas songs from Motown’s finest, The Temptations, The Supremes and The Jackson 5. These songs were chosen for their enduring popularity year after year, and the new videos will allow us to deliver them to fans and new audiences alike across digital platforms. We are also planning to use the videos in marketing and advertising campaigns to achieve even greater engagement with fans.”

The videos will be rolled out this month, with the first two – Brenda Lee’s “Rockin’ Around The Christmas Tree” and Frank Sinatra’s “Jingle Bells” – launching the initiative.

“When I recorded ‘Rockin” in 1958, I never could have dreamt that it would become a Christmas standard that would be listened to year after year and loved by generation after generation,” says Brenda Lee. “I always loved the song and knew it was great, and that was the main criteria for me and Owen, but we never imagined it would become the quintessential Christmas song it has become, it’s been an amazing journey with this song. I thought Home Alone was a pretty darn good video so I never brought up the idea of a video but I’m honored that Universal has created ‘Rockin”s first-ever video.”

“Frank Sinatra’s holiday recordings have been spreading joy and cheer to listeners for decades. We are happy that Frank’s recording of ‘Jingle Bells’ now has an official video and that it’s part of UMe’s holiday campaign,” says Frank Sinatra Enterprises.

For those who want to get right into the holiday spirit now, UMe’s Christmas playlist features some of the most popular songs and artists across the holiday music canon, pairing timeless classics with contemporary favorites. The hours-long –and ever-expanding – playlist is available now for streaming on Spotify and Apple.

Three distinct looks, encompassing “Classics,” “Rat Pack” and “Motown,” each with their own unique style, art direction and vibe, have been created by three different animation studios to celebrate these classic tunes, all chosen for their enduring popularity and sustained performance on both radio and streaming platforms year after year. In addition to creating new content for the digital age, the video assets will also be deployed across UMe’s holiday marketing and advertising campaigns for a cohesive look and to achieve greater engagement across a broader audience.

Created by Ingenuity Studios and inspired by the style of vintage UPA cartoons of the 1950’s and 60’s, Brenda Lee’s “Rockin’ Around The Christmas Tree” soundtracks a merry trio of musicians as they perform throughout town and encounter scenes from popular holiday movies. The resulting video happily smashes the nostalgia button for modern viewers with its clever Easter eggs, in a stylized treatment that looks as though it could have been released when the song debuted in 1958. This style and trio carry over to the videos for Bobby Helms’ “Jingle Bell Rock,” which echoes back to Hanna-Barbera’s old “Wacky Races” cartoons, and Burl Ives’ “Holly Jolly Christmas,” which plays with the madness of holiday shopping.

To create the new videos for The Jackson 5’s “I Saw Mommy Kissing Santa Claus,” The Supremes’ “My Favorite Things,” and The Temptations’ “Silent Night,” creative agency Ride Or Cry drew inspiration from classic Motown branding and imagery, as well as 1960’s and 70’s animation classic television series. The engaging videos all feature big, bold colors and a vibrant animation style, mixed with live action for a nostalgic, period-setting salute.