One of the most iconic singers of his generation, Marvin Gaye, “The Prince of Motown,” would have been 76 years old on April 2nd of this year. Inducted into the Rock and Roll Hall of Fame in 1987, Gaye was cited for his “huge contribution to soul music in general and the Motown Sound in particular…[his] classic R&B voice was edged with grit yet tempered with sweetness…[projecting] an air of soulful authority driven by fervid conviction and heartbroken vulnerability.”

Universal Music Enterprises and Motown Records celebrate that legacy with a reissue roll-out over the next three months leading up to his birthday and beyond: two classic albums, a new digital single, a 7″ vinyl single and a comprehensive, seven-LP collection. That includes a vinyl version of his 1972 Trouble Man soundtrack (February 10th); two rare cuts from 1972, “Where Are We Going” and “Woman Of The World,” that were first released only as a vinyl 12″ last year, when it was mixed by the original co-producer Larry Mizell, now available as a digital single for the first time (March 31st); a Blu-ray Audio, 96k/24-bit release of his 1973 chart-topping album, Let’s Get It On (April 28th); and a special limited edition double A-sided 7″ vinyl single of his 1965 hit, “How Sweet It Is (To Be Loved By You)” b/w “Once Upon A Time” with Mary Wells (April 14th), when he will be honored as Motown’s iTunes Artist of the Month. In addition, a seven-album 180-g vinyl box set, Marvin Gaye 1961-1965, covering the first seven albums of his remarkable career, will be released May 19th.

Known for his bold stance on racial equality and his pointed politics on albums like the legendary 1971 classic What’s Going On and intensely personal, provocative songs, it is apt that Gaye’s remarkable career should be celebrated throughout the year.

Trouble Man, the 1972 follow-up to the previous year’s What’s Going On, is a mostly instrumental, orchestral jazz-soul soundtrack to the mostly forgotten crime thriller of the same name, but its title track was a Top 10 pop hit and the album itself is credited with spawning the acid-jazz movement. Gaye recorded the album in Motown’s new home of Los Angeles. A 40th anniversary expanded edition was released in 2012 by Universal Music Enterprises that combined the soundtrack and score albums. This version of the original soundtrack will come out on 180-g vinyl and will recreate the album’s original unique gatefold design.

Let’s Get It On was first released on August 28, 1973, recorded both in Detroit and Los Angeles. The album, with its combination of funk and romance, established Gaye as a romantic icon, producing three hit singles: the chart-topping title track – named by Vibe magazine as the No. 1 love songs of all time – as well as “Come Get to This” and the frisky, explicit “You Sure Love to Ball.” The album peaked at #2 on the Billboard Top 200, charting for a total of 61 weeks; it was No. 1 for 11 weeks on the Soul LPs charts. The album was inducted into the Grammy Hall of Fame in 2004 and was one of three Gaye albums on Rolling Stone’s 2003 list of “500 Greatest Albums of All Time.” With a 5.1 Surround mix supervised by the album’s original engineer, this will be the first time it’s available in digital Blu-ray audio.

UMe will also mark the 50th anniversary of one of Gaye’s most beloved hits, “How Sweet It Is (To Be Loved By You),” a Top 10 pop and R&B smash in 1965, with the double A-side, “Once Upon a Time,” a duet with Mary Wells that went to Top 10 R&B and Top 20 pop in the fall of 1964. A special vinyl double-sided 7″ featuring both tracks will be released in time for Record Store Day on April 18th.

To mark Gaye being named April’s iTunes Motown Artist of the Month, UMe will release a seven-vinyl-album box set, Marvin Gaye 1961-1965, featuring the first seven albums of his career, including the stereo mixes of his 1961 debut, The Soulful Moods of Marvin Gaye, That Stubborn Kinda Fellow (1963) and When I’m Alone I Cry (1964), for the first time ever in the LP format. The collection also includes Hello Broadway…This Is Marvin (1964); Together, his 1964 album of duets with Mary Wells; How Sweet It Is to Be Loved by You (1965), and A Tribute to the Great Nat “King” Cole (1965). The release is the first of three planned vinyl box sets which will encompass the breadth of Gaye’s career.

The singer/songwriter’s first solo hit, “Stubborn Kind of Fellow,” was released in September ’62, reaching #8 on the Billboard R&B chart and #46 on the Hot 100, appearing on the album of a similar name which came out the following year. Gaye also had a hit with the dance song, “Hitch Hike,” from the same album, peaking at #30 on the Billboard Hot 100, as well as his first Top 10 single with “Pride and Joy.”

In 1964, Gaye’s duet album with Mary Wells, Together, peaked at #42 on the Billboard pop album chart. The album’s two-sided single, “Once Upon a Time” and “What’s the Matter with You Baby,” each reached the Top 20. Marvin’s next solo hit, “How Sweet It Is (To Be Loved By You),” the title track to the 1965 album, written for him by Holland-Dozier-Holland, reached #6 on the Billboard Hot 100 and Top 50 in the UK. 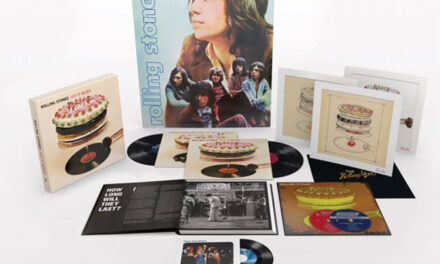