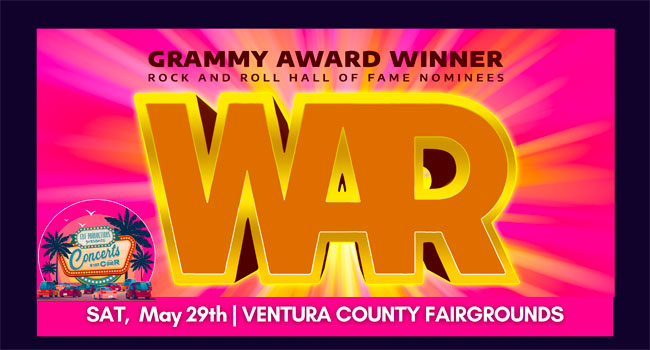 Memorial Day Weekend at the Ventura County Fairgrounds is heating up with the announcement of a live performance by WAR on Saturday, May 29th as part of the Concerts In Your Car 2021 summer line up.

Tickets start at $99 per car for up to four passengers, with additional passenger tickets available for purchase. The number of passengers must not exceed the number of safety belts/seats in the vehicle. Tickets are sold in advance and online only at concertsinyourcar.com.

All Concerts In Your Car events include a visual light show and multi-media entertainment. The combination of an extra high, theatre-in-the-round style, four-sided stage and four over-sized screens ensures that every seat is the best seat in the house. The events are designed to comply with all state and county restrictions. Sound comes from the stage like a traditional concert and can also be heard via car stereos on an FM station.

Known as the original street band, WAR has been sharing its timeless music and message of brotherhood and harmony with millions across the globe for over five decades. A musical crossover band that fuses elements of rock, funk, jazz, Latin, R&B, psychedelia and reggae, the band was known for transcending racial and cultural barriers with a multi-ethnic line-up when it was founded in 1969.

Multi-platinum-selling WAR has sold more than 50 million records since its formation with multiple Billboard Top 40 hits including such timeless classics as “Why Can’t We Be Friends,” “Low Rider,” “The World Is A Ghetto,” and “The Cisco Kid.”

Former President, Barack Obama, placed “All Day Music” on his 2020 summer playlist, just the latest example of WAR’s influence being felt in modern times. With samples and nods by artists such as Kendrick Lamar, Flo-Rida, Thomas Rhett, Tupac, Smash Mouth, Janet Jackson, Dave Matthews, Korn, and countless others, it is evident that WAR continues to inspire today’s musicians with its unique sound.