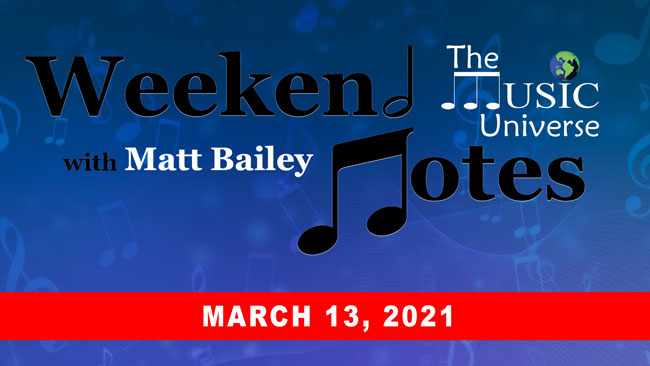 Matt Bailey has the latest headlines of the week

The cultural divide in the music industry continues as The Weeknd announces he’s boycotting the GRAMMYs forever due to a “secret committee” which he believes is flawed. The Canadian pop star is citing the anonymous panel of experts who review the initial nominations. Those nominations are submitted by thousands of music industry professionals who make up the voting membership of the Recording Academy.

He tells The New York Times, “Because of the secret committees, I will no longer allow my label to submit my music to the GRAMMYs.”

After having one of the biggest albums of 2020 with After Hours, The Weeknd’s name was surprisingly left off the 63rd Annual GRAMMY nominations list when they were unveiled in late November. Shortly thereafter, the pop star lashed out at the Recording Academy on social media, calling them “corrupt” for the snub, tweeting, “You owe me, my fans and the industry transparency…”

The backlash is believed to have stemmed from an ultimatum by GRAMMY execs in which The Weeknd was forced to choose between performing at the GRAMMYs — initially scheduled for January but postponed to this weekend due to the pandemic — or performing at the Super Bowl Halftime Show in early February. Sources claim testy negotiations led to an agreement where Tesfaye could perform at both prestigious events, however, it’s suspected his decision to perform at the Super Bowl cost him GRAMMY nominations due to bitter back-and-forth talks that GRAMMYs honchos didn’t like.

Less than a dozen black artists are among the many nominees at this year’s show, which takes place on Sunday. Among those, Beyoncé leads with nine, Roddy Ricch with six, Brittany Howard with five and DaBaby and Megan Thee Stallion each with four.

The Weeknd’s smash single “Blinding Lights” has once again broken chart records as it spends a full year in the Top 10 of Billboard’s Hot 100. This week, the song marks its 52nd week in the Top 10, becoming the only song in the chart’s 63-year history to spend a full year in the Top 10. The song premiered at No. 11 in November 2019 before hitting the Top 10 in February 2020, where it has remained ever since. Four of those weeks were spent at No. 1 in April and May with the track becoming the chart’s biggest hit of 2020.

Keith Urban and Mickey Guyton are set to host the 56th Academy of Country Music Awards, honoring the biggest names and emerging talent in country music. CBS presents the 56th ACM Awards live from three iconic country music venues: the Grand Ole Opry House, Nashville’s historic Ryman Auditorium and The Bluebird Cafe on Sunday, April 18th from 8-11 pm ET live/delayed PT on the CBS Television Network, and available to stream live and on demand on Paramount+. It’s Urban’s second year hosting the show as Guyton makes her hosting debut while not being nominated for a single award. Nominations were announced last month with Maren Morris and Chris Stapleton leading with six apiece. Miranda Lambert continues her streak as the most nominated female artist in Academy history with 68 lifetime nominations as she follows with five.

Morgan Wallen continues his reign as the best selling artist of 2021, despite being blacklisted by the country music industry last month after video surfaced of him using a racial slur. His sophomore effort, Dangerous: The Double Album, tops the Billboard Top 200 chart for the eighth consecutive week, making it the only country album to spend its first eight weeks at No. 1. Dangerous is the latest of six albums to have spent at least eight weeks total at No. 1, tying Taylor Swift’s Folklore for the second-most weeks at the top spot in the past five years.

The album debuted atop the Billboard list seven weeks ago and set the bar for country records by shattering first-week streams and on-demand Alexa requests. Upon its release in mid-January, Wallen demolished first day streaming records, becoming Spotify’s biggest all-time first day stream record for a country album and setting the record for the biggest first day and biggest first week for a country album of all-time at Apple Music in just two days.

Only three of the album’s eight chart-topping weeks have been backed by any industry support as his fans have been flocking to streaming outlets in an effort to campaign against cancel culture, despite Wallen himself requesting he not be supported at this time.

Eminem, however, is clapping back at Gen Z’s cancel culture craze with an animated lyric video for “Tone Deaf.” The rapper released the track last week in response to TikTok users who have campaigned in recent weeks to have him canceled after discovering his controversial lyrics. Users are arguing the rapper glorifies abuse in his 2010 hit “Love The Way You Lie” with Rihanna, with a not safe for work line that ends with, “I’m a tie her to the bed and set this house on fire.” The rapper presents the five minute “Tone Deaf” video with Grand Theft Auto-style graphics and lyrics he refuses to amend for the sensitive crowd. It’s featured on his latest surprise release Music To Be Murdered By – Side B from December that shattered a 50-year-old record for biggest leap on the Billboard 200 chart after the original 20 track album, released in January 2020, spiked from No. 199 to No. 3.

Fox has won the bid for a script-to-series commitment for an hourlong anthology series based on the music of Huey Lewis. The Untitled Huey Lewis Project is a self-contained romantic comedy inspired by the music of a beloved pop star. The show is an homage to 80s and 90s romantic comedies with Lewis being the inspiration for season one. Lewis will executive produce the series alongside writer Leila Gerstein, who created Hart of Dixie, and Aaron Kaplan and Dana Honor of Kapital Entertainment. No word on when production will begin.

Cardi B has made history as her major label debut single, “Bodak Yellow,” goes diamond for ten million certified units. The RIAA made the announcement early last week cementing her as the first female rapper to achieve RIAA diamond single status. She also made history upon its release in October 2017 when the single hit No. 1 on the Billboard Hot 100. It made her the first female rapper to top the all-genre chart without other credited artists in 20 years, breaking Lauryn Hill’s first solo entry in November 1998.

Miranda Lambert has unveiled further details about her honky tonk, Miranda Lambert’s Casa Rosa, which is the first female artist bar on Broadway. The complex will feature a four-level bar and restaurant with rooftop bar and breathtaking city views that reflects Lambert’s passion for Tex-Mex and live music. Food offerings will be of classic Tex-Mex fare with “extensive” margarita and tequila options available. Lambert will also display some of her most important and recognized memorabilia. Casa Rosa Nashville is set to open this summer.