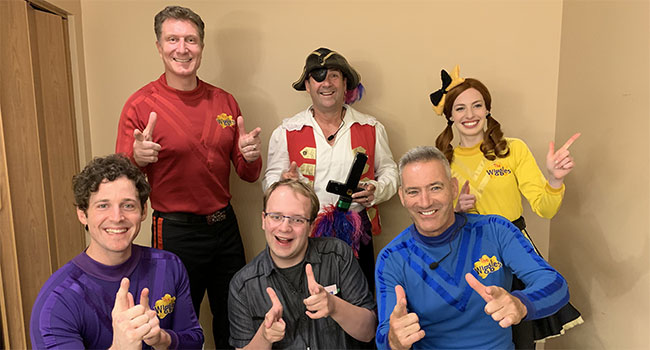 The mega-famous children’s band had all ages smiling.

Beautifully made signs of adulation. Crowds so loud you can barely hear the artists’ performing. You would think I’m describing the latest Guns N Roses tour, wouldn’t you? Nope. I’m talking about a concert from The Wiggles, the most famous children’s band on the planet.

The crowd (both parents and adults) at The Wiggles’ NYCB Theatre at Westbury stop on their Party Time Tour last night (Wed, Sept 4th) was as raucous as any adrenaline-fueled rock concert at the Garden. Of course, there is one key difference, which I’ll get to at the end of this article.

Signs shaped in yellow bows (Yellow Wiggle Emma is famous for her hair bow), bones for Wags the Dog, roses for Dorothy the Dinosaur, and so many other treats for the color-clad Wiggles and their friends were littered throughout the audience, thrusted at the performers by their toddler fanbase with all the vigor with which I might reach out just to touch Garth’s hand (long story.)

At this concert, Emma Wiggle (Emma Watkins), acted as lead co-vocalist with purple skivvy-ed Lachlan Gillespie, who himself spent a good portion of the 75 minute show behind a keyboard. (A highlight was his brief but lovely rendition of Elton John’s “Your Song” during a moment meant to show off the band’s talent to the adults.)

Emma demonstrated her range of dance skills, from ballet to Irish step dancing. Quite a few of her numbers included American Sign Language. Having taken two semesters of ASL, I found myself signing with her. (Fun fact–she is fluent in both American and Australian Sign Languages.)

Red Wiggle Simon Pryce’s subdued nature was a great contrast to the rest of the group’s high-octane interactions with the tots. Although, this trained opera singer could shake his tail feather in ways that delighted both kids and adults…for very different reasons.

Anthony Field, whom I had the pleasure of speaking with earlier this summer, played ringmaster, at times quite literally taking the reins of the show and pulling it in one direction or another. As well he should. Not only is Anthony — dressed in blue — the only original member of The Wiggles still touring, he is quite literally the founder of the group.

An example of such direction was when Dorothy the Dinosaur had trouble navigating Westbury’s curious in-the-round stage design. Anthony instructed Captain Feathersword, yet another of the Wiggles’ friends, to assist Dorothy up the skinny ramp to the off-stage cove.

Let me talk for just a moment about that Captain with ticklish sword. Often referred to as the “Fifth Wiggle” — indeed, Cap did spend most of the show onstage — he serves as the entertainer that bridges parent and child. His impressions of celebrities make the children laugh with their silliness, but are first-rate and astound the adults on a whole different level.

The show moved swiftly, too swiftly to count the number of songs performed. Adapting to children’s attention spans, songs were rarely over two minutes long. Songs famous from both generations of the Wiggles were present in a surprisingly balanced and equal measure. It was uplifting to see that “Fruit Salad (Yummy Yummy)” and “Hot Potato” have endured among the toddler set. Hopefully, “Do the Propeller” and “Simon Says” will as well.

You might think it’s silly to talk about the cannon of a children’s band like one talks about Bob Dylan’s back-catalogue. But think back to when you were a kid. Think back to the entertainment that you enjoyed and that shaped your tastes. These songs are important to children. Children’s music is formative in ways only the most educated children’s specialists like the Wiggles and their childhood development consultants can understand.

If I had any criticisms, it would be this: The Wiggles’ friends including Dorothy the Dinosaur, Henry the Octopus, and Wags the Dog had too little stage time! Their appearances felt rushed, and I could tell the kids wanted to see more. Also, Emma — arguably the most popular Wiggle — would disappear for long stretches due to costume changes, with children again wondering, “Where’s Emma?” Sometimes in production shows, less is more. I don’t think the toddlers would agree.

The Wiggles were backed by two musicians, a drummer from Limerick, Ireland (who is now somehow also a pilot for United Airlines?), and a guitar player from Australia. It was the latter’s first time in America. Also, there was a troupe of very talented young dancers whom you could tell truly enjoy making children smile.

Oh, and when you go see the Wiggles, make sure to bring a sign! They take requests from those signs and even collect them.

One beautiful element to the crowd at a Wiggles concert is the amount of children and adults who come to the show who have special needs. As I discussed with Anthony, these fans identify with the characters and colors, and are able to express themselves through the Wiggles’ music. Though they may be aimed at children, The Wiggles’ relationship with their fans who have Autism or other special needs is very important to the group.

I’ll admit it: I was nervous about covering this in the days leading up to it. I was a mixture of excited and cynical about revisiting my childhood via concert. “Oh, I’ll go and be the loner, shrinking violet in the back with my press badge trying to justify why I am here.” The experience could not have been further from that preconceived notion.

And that’s the difference between the excitement at a rock concert and at a Wiggles concert. At a rock concert, that noise and fandom and adulation is a conduit for acknowledging and letting go of our cynicism about the world. There is always some artist is screaming at you, and you are screaming back, sharing an experience and letting go. We’ve become so wrapped up in ourselves, society says it’s “babyish” to revisit the things that formed us as younger humans. They are the ones who are wrong.

At a Wiggles concert, no such cynicism even exists. The show is just pure joy. Joy for the children to see something they love in person, and joy for the parents to live through it. A joy so infectious, it had me smiling all night, making new memories by reliving old ones. Now, where is my fruit salad?