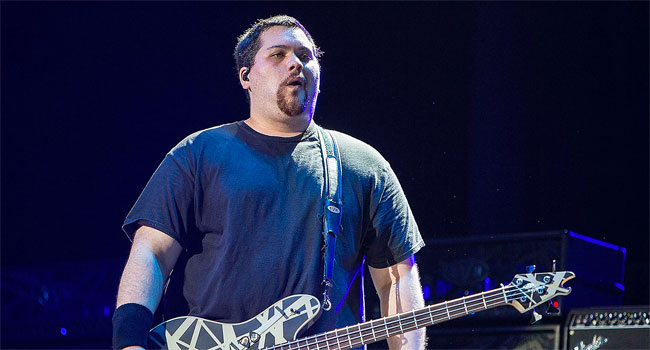 Striped guitars were used by father on stage

Wolfgang Van Halen is criticizing the sale of three Eddie Van Halen guitars that sold at an auction earlier this week. The rocker says the instruments sold by Julien’s Auction as part of their Icons & Idols Trilogy: Rock ‘N’ Roll auction were not as “iconic” as originally reported.

The press release we received by the auction house describes one guitar as having been “played by one of the greatest guitarists of all time — Eddie Van Halen,” another having been used on stage in San Antonio, TX, and the final one used in the “Hot For Teacher” video.

Wolfgang took to Twitter to inform everyone that the guitars are not as iconic as they seem.

“The headline should read: ‘Three guitars that are striped were sold at an auction for charity.’ They weren’t stage guitars. I had nothing to do with this. I don’t EVER plan on selling any of my father’s iconic guitars. The only place they’d possibly belong in is a museum,” Wolfgang writes on Twitter.

He continues, “Also one was a gift. I don’t know who’d want to give that away. Timing is a little fishy to me. Oh wait, scratch that. It WASN’T for charity. They’re just taking advantage of my father’s passing. What a surprise. Fuck ‘em.”

The headline should read:

“Three guitars that are striped were sold at an auction for charity.”

I had nothing to do with this.

I don’t EVER plan on selling any of my father’s iconic guitars.

The only place they’d possibly belong in is a museum. https://t.co/npM4TZKWYU

“Before the comment section takes on a life of it’s own with people not reading the article… I had nothing to do with this. I would never sell any of my father’s guitars. They are priceless to me. They belong in a museum if anything,” he writes.

He continues, “The stories for this have been saying they were ‘iconic’ guitars. Not true. That makes it seem like the Frankenstein or the Shark guitar were sold. Yeah that’s bullshit. One of the guitars auctioned off was actually a gift so yeah, seems a little shitty if you ask me.

“I initially thought that this was a charity auction, but it wasn’t. Just people taking advantage of the situation and selling anything that had to do with my father. So like I said above, ‘fuck em.'”

The three guitars sold for more than $422k combined, with one of the guitars having been gifted and inscribed to Van Halen’s close friend Bryan Cush, the owner of Cush’s Centenary Oyster House in Shreveport, LA in 1991. Michael Sohigian, a lawyer for Cush’s estate, tells Wolfgang via Twitter that the customized Kramer electric guitar built by Van Halen with his guitar tech Matt Bruck at his 5150 Studios was sold without permission, and now a lawsuit is in the works to get it back to Cush’s heirs.

“During the probate of Bryan’s estate, which included your dad’s guitar that Bryan treasured and displayed at COH & home, one of his brothers sold it on eBay without telling or asking permission. The eBay buyer sold it Julien’s Auctions yesterday for $231k so “fishy” is an understatement. I’m the lawyer for Bryan’s heirs, and we’re suing Julien’s Auctions, the eBay buyer, and whoever bid $231k to get back Bryan’s family’s treasured heirloom,” he writes.

@wolfvanhalen
, you don't know the half of it. Your dad gave the guitar to Bryan Cush, one of the brothers who owned Centenary Oyster House in Shreveport (ask your Uncle P), inscribed to Bryan, "let's get shucked up." After Bryan died. . . 1/ https://t.co/T6yNYaFGm9

@wolfvanhalen
. . . so "fishy" is an understatement. I'm the lawyer for Bryan's heirs, and we're suing @JuliensAuctions
, the eBay buyer, and whoever bid $231 K to get back Bryan's family's treasured heirloom. Last but def not least, really really sorry for your loss. VH4vr.

Wolfgang responded by saying, “The guitar auction shit just got a lot more interesting. I knew something seemed fishy. Really hope they can get that gifted guitar back for the family.”

The guitar auction shit just got a lot more interesting. I knew something seemed fishy. Really hope they can get that gifted guitar back for the family. https://t.co/2i0g9RRAsG

We’ll have further details, should they become available.