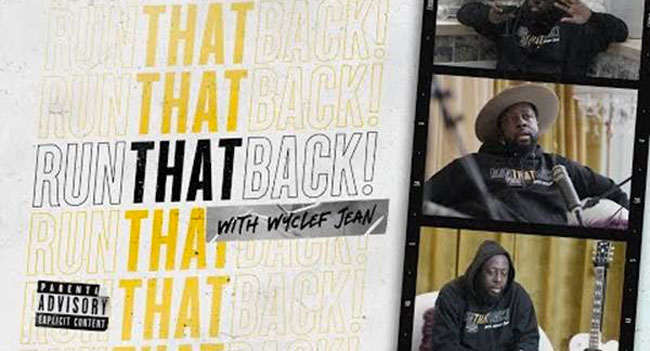 Three-time Grammy award-winning artist, producer, and songwriter Wyclef Jean is ready to set off your earbuds on an entirely new level with his new show RunThatBack. Premiering August 20th at 7 pm EST/4 pm PST on YouTube, Jean hosts an unpredictable, unfiltered, and unbelievable set of sit-downs with some of the biggest names in music, politics, pop culture, and sports with guests including Lena Waithe, Clive Davis, Gunna, will.i.am, Shaquille O’Neal, PK Subban, Carlos Santana, Rapsody, Teddy Riley, Beenie Man, and many more. RunThatBack is a one of a kind show for music and culture lovers of all types, and when a guest is having a conversation with Wyclef Jean, there’s no telling where things will go or what will happen. Wyclef himself extolls, “I ain’t really good at interviews, but what I am good at is conversations with my friends.”

RunThatBack is co-created by Malka Media and Executive Producer Louis Krubich, the team behind hit shows: All The Smoke, Morning Kombat, Get Some with Gary Owen, 4th and Forever and the upcoming Fox documentary Tua.

“Wyclef is a cross generational talent that connects music and culture and we’re humbled by the opportunity to help amplify the stories he wants to tell,” says Krubich. Creative Director and Showrunner Kerry Laster was instrumental in the cutting edge and of-the-moment milieu surrounding the show. Regarding collaborator Laster, Krubich states, “Having Kerry Laster showrun and direct this series is wildly exciting for us. He is a true creative genius and someone we highly respect.”

In an exciting collaboration with BACARDÍ rum, Jean will serve up untold stories over signature rum cocktails from his rockstar life as a founding member of the icon group “The Fugees” in segments like “Rum Talk” and “Toast Up.” As Wyclef says, “A lot of the things you’re gonna hear, you ain’t really gonna believe. So you’ve got no choice but to Run That Back!”

RunThatBack premieres its 12 episode first season on August 20th, with new episodes airing weekly. RunThatBack will also be available in audio form the following day on all major podcasting platforms.

Wyclef Jean has sales upwards of 100 million albums worldwide and 20 million singles globally. He is one of the most influential figures in popular culture. Having made his indelible mark on the music landscape as a founding member of The Fugees, he has continued his soaring success through his solo career, and produced some of the most successful songs in history. Jean is one of the few artists whose work transcends space and time by understanding and absorbing the influences around him and translating them into a sound that is always relevant and fully his own.

As a solo artist, Jean has released seven albums, selling nearly nine million copies worldwide. His 2017 studio album, Carnival III: The Fall and Rise of a Refugee, was named one of the “25 Most Anticipated Albums” of the fall by Billboard Magazine. In November 2018, Netflix announced the production of an untitled animated project based on the real-life story of his childhood in Haiti. Jean recently released his newest project, Wyclef Goes Back to School, a collaboration with students he met while touring the US.