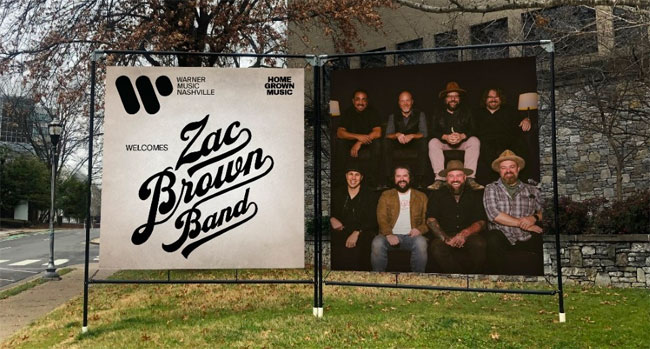 “Warner Music Nashville and Zac Brown Band share a fundamental value: forging connections through amazing and heartfelt music,” shares Warner Music Nashville Chairman & CEO John Esposito. “Their songs have ceaselessly fed our hearts and souls, and I am so proud to welcome them to our label home as we journey together into this new chapter.”

“We couldn’t be more excited to become part of the Warner Music Nashville family. We feel incredibly blessed to be working with John Esposito, Cris Lacy, Ben Kline and their talented team. We’ve been hard at work in the studio and can’t wait to share our new music with our fans!” Zac Brown adds.

“Zac Brown Band is known worldwide for their consummate musicianship, litany of timeless hits and incomparable live shows,” shares Added WMN EVP A&R Cris Lacy. “From the moment they stepped onto the scene, they were grinding out this game-changing vision. When we heard the new music our only question was, ‘How quickly can we get this to the fans?’ It was absolutely, positively undeniable. Enough said. It feels good to have them back in the Warner family, and we’re excited to make some new history together.”

Zac Brown Band is a multi-platinum, GRAMMY Award-winning, southern rock group led by front man, Zac Brown. Throughout their career spanning more than a decade, Zac Brown Band has had six consecutive albums reach the Top 10 of the Billboard 200 and five consecutive albums debut at No. 1 on Billboard’s Country Albums chart. To date, the group has won three Grammy Awards, including Best New Artist in 2010, sold more than 30 million singles, nine million albums, amassed over 9.3 billion catalog streams to date, achieved 15 No. 1 radio singles and are the second act to top both the country and active rock formats. Zac Brown Band has headlined seven North American Tours and currently holds the record for most consecutive sold out shows at the iconic Fenway Park. Since their debut, Zac Brown Band has developed a reputation with critics and fans alike as one of the most dynamic live performers, marked by strong musicianship that defies genre boundaries.