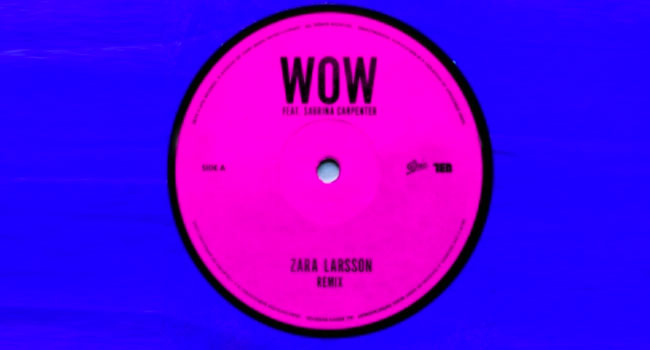 Zara Larsson unleashes a remix of her buzzing hit single “WOW” featuring Sabrina Carpenter via TEN/Epic Records. Last month, “WOW” exploded on the heels of a sync during a romantic dance sequence between the two main characters in the Netflix Original hit film Work It. In the aftermath, the track vaulted up the charts of both Top 40 and dance radio and amassed over 60 million streams and counting.

Adding to this excitement, Larsson linked up with her friend and fellow pop femme fatale Sabrina Carpenter to re-up “Wow.” After starring in Work It, Carpenter brings yet another dimension to this anthem. She and Larsson lock into a slick, seductive, and scorching back-and-forth as the track stretches from piano-laden verses towards a swaggering hook carried by a boisterous horn section and glitchy beats, produced by none other than Marshmello.

The official video soon will be out soon.

Wielding those superpowers, Zara Larsson provokes and pushes pop music and culture forward with empowered, enlightened, and energized anthems that soar and seduce all at once. With every move, she continues to quietly make history and break records. Her RIAA gold certified 2017 full-length, So Good has amassed nearly four billion streams. Her growing catalog boasts one smash after another, including the triple-platinum “Never Forget You” with MNEK, the platinum “Lush Life” and “Ain’t My Fault,” and, most recently, 2019’s gold “Ruin My Life.” Out of dozens of nominations, she has received various awards and honors at the Swedish Grammi Awards, Nickelodeon Kids’ Choice Awards, MTV EMAs, and more. Gracing the stage of the 2017 Nobel Prize Peace Concert, she performed the platinum “Symphony” with collaborators Clean Bandit. Emerging from lockdown in 2020 with a fierce, focused, and feminine fire, Zara arrives with a bold and boundary breaking body of work for her second international album.