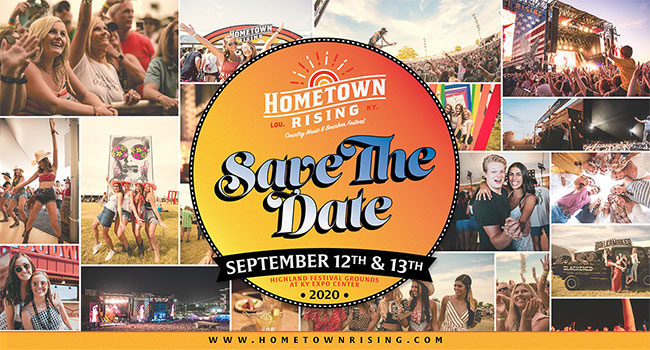 After welcoming a sold out crowd of over 70,000 fans to the inaugural Hometown Rising Country Music & Bourbon Festival, Danny Wimmer Presents is excited to announce the dates for the Second Annual event, September 12 and 13, 2020 at the Highland Festival Grounds at KY Expo Center in Louisville, Kentucky.

Part of Danny Wimmer Presents’ Louisville Trifesta, Hometown Rising will kick-off the three-week festival series, with Louder Than Life occurring September 18-20th and Bourbon & Beyond wrapping up the month on September 25-27th.

“Hometown Rising was our first venture into country music, and we could not be more thrilled with how 2019 went. Delivering great music and incredible bourbon – two of Louisville’s cornerstones, was a highlight of our year. We can’t wait to be back in 2020 and are excited to bring another tremendous lineup and experience to the country music community,” shares DWP Founder Danny Wimmer.

The lineup for Hometown Rising will be announced in February, with early bird passes for Hometown Rising, along with the return of the Trifesta pass, both on sale in late January. Fans can expect the same elevated festival experience in 2020, including top-notch food and beverage options, line dancing in the Kroger’s Big Bourbon Bar, access to on site camping and unique one-of-a-kind activations.

The Highland Festival Grounds at KY Expo Center are located at 937 Phillips Lane in Louisville.