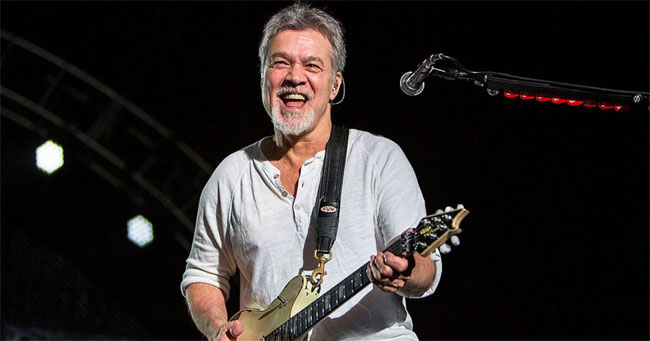 Eddie Van Halen has died at the age of 65 after a long battle with throat cancer. TMZ first reported the breaking news that the legendary guitarist died Tuesday (Oct 6) at a Santa Monica hospital after his health declined in the past 72 hours.

A short time later, his son, Wolfgang Van Halen, confirmed the news in an open letter on social media.

“I can’t believe I’m having to write this, but my father, Edward Lodewijk Van Halen, has lost his long and arduous battle with cancer this morning,” Wolfgang shares.

“He was the best father I could ever ask for. Every moment I’ve shared with him on and off stage was a gift.

“My heart is broken and I don’t think I’ll ever fully recover from this loss.

Reports indicate doctors just discovered Van Halen’s cancer had spread beyond his throat and into his brain and other organs. Van Halen had been battling the disease since 2000, but was declared cancer free in 2002, only for it to return in 2011. He rarely spoke about his well-being, but he confirmed a third of his tongue was removed upon initial treatments early on. He also recently underwent a new round of chemo, as he was in and out of the hospital over the past year, partly due to intestinal issues.

TMZ also says Van Halen had been flying back and forth between the U.S. and Germany for the past five years for radiation treatment. Van Halen was a heavy smoker, but had believed he contracted the disease from metal and copper guitar picks he frequently held in his mouth more than 20 years ago.

His wife, Janie, Wolfgang, and Eddie’s brother and drummer Alex, were by his side when he passed.

Van Halen, featuring Eddie and Alex with Michael Anthony on bass and David Lee Roth on vocals, emerged from the clubs along the Sunset Strip in the ’70s. His virtuosic guitar playing inspired countless guitarists behind him, but alcohol and drug abuse deteriorated the band through the years.

Roth left in 1984, and Sammy Hagar took over vocals in 1985 when the band arguably earned its biggest success with albums such as 5150 and For Unlawful Carnal Knowledge. A falling out later led to Hagar and Anthony’s departure. Years later, the band reunited with Roth and added Wolfgang as its bassist and backing vocalist.

Van Halen and Roth have reunited off and on for tours in recent years, releasing its potentially final album, A Different Kind of Truth, in 2012. In 2016, we reported that a reunion tour and album was set for the group’s 40th anniversary in 2018, but nothing solidified. It was also suggested that Hagar would some how “take part” of the festivities as he and Eddie exchanged tweets after years of silence between the pair. However, Hagar has stated several times in the past that he would never return to Van Halen without Anthony.

In 2018, Anthony was approached about touring in 2019, but talks dissolved and questions went unanswered. Anthony later dismissed those talks, only to confirm he was actually approached by Van Halen’s management, but was left hanging.

The band was inducted into the Rock and Roll Hall of Fame in 2007.

Per the usual, celebrities have shared their thoughts via social media.

Heartbroken and speechless. My love to the family. pic.twitter.com/MQMueMF2XO

What a Long Great Trip It’s Been.. pic.twitter.com/M5pmkVi7hW

No words…Heartbroken, my love to the family💔

My heart is broken. Eddie was not only a Guitar God, but a genuinely beautiful soul. Rest in peace, Eddie! …Eddie Van Halen Dead at 65 from Cancer https://t.co/gITtcndQVv

I am devastated at the news of the passing of my friend Eddie Van Halen. pic.twitter.com/hUyIdKXsdG

I am in complete and utter shock over the news of Edward Van Halen’s passing…Very few musicians ever come along that change the entire landscape of their instrument and King Edward was one of those few. One of the G.O.A.T! #RIPEVH #RIPEdwardVanHalen 😢😢😢 pic.twitter.com/1uuMLt1cvv

Rock and roll lost a great man today. Eddie Van Halen, your guitar was legendary, and your music will live on forever.

I’m just devastated to hear the news of the passing of my dear friend Eddie Van Halen. He fought a long and hard battle with his cancer right to the very end. Eddie was one of a very special kind of person, a really great friend. Rest In Peace my dear friend till we meet again. pic.twitter.com/Qs8tsLPANJ

RIP Eddie Van Halen. Van Halen were a tremendous influence on both Vinnie & Dime & Pantera. Hopefully they are all rocking out together now! pic.twitter.com/XtnL33aGsd

RIP Eddie Van Halen, 65.
One of the greatest guitarists in music history and a delightfully warm, funny guy.
‘To hell with the rules, if it sounds right – then it is.’ pic.twitter.com/AZIAEMC5Pm

Oh man, bless his beautiful creative heart. I love you Eddie Van Halen, an LA boy, a true rocker. I hope you jam with Jimi tonight. Break through to the other side my brother. ❤️❤️❤️ https://t.co/XpcTlPJq9A

R.I.P. Eddie Van Halen, a true pioneer in music. To have lived in a time…

This goes beyond the passing of a great guitarist, but rather is a tremendous loss of a great man who truly helped to change my life and path with his guitar and sound. He helped forge the way for myself and many and will be deeply missed. Rest in peace, Eddie. @eddievanhalen pic.twitter.com/5RXCtC0N91

Crushed. So fucking crushed. RIP Eddie Van Halen. You changed our world. You were the Mozart of rock guitar. Travel safe rockstar.

Just when I thought 2020 couldn't get any worse, I hear Eddie Van Halen has passed. So shocking- One of the nicest, down to Earth men I have ever met and toured with. A true gent and true genius. RIP. So sad.Thoughts go out to his brother Alex, and his family. pic.twitter.com/fwIw040YMX

The world lost an icon, innovator, showman, virtuoso, master songwriter and perhaps one of the biggest inspirations ever to learn how to play guitar. Heartbroken to hear of Eddie Van Halen’s passing. Our love, condolences and best wishes to his his family, friends and fans. #RIP pic.twitter.com/pGhPUXRzyb

Eddie Van Halen and Neil Peart were just too good for 2020.
We all are
My heart is broken