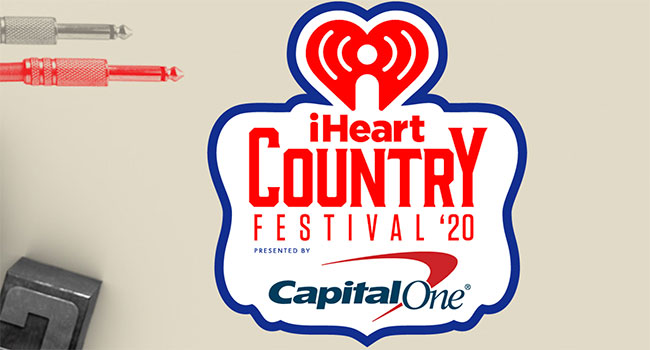 iHeartMedia has announced that the 2020 iHeartCountry Festival Presented by Capital One, originally scheduled for May 2nd at the Frank Erwin Center in Austin, Texas, will now be a virtual streaming and on-air radio special on October 23rd. The seventh annual event featuring performances from Dierks Bentley, Lady A, Sam Hunt, Kane Brown, Kelsea Ballerini, Dustin Lynch, Jon Pardi, Riley Green with special performances by Morgan Evans and Gabby Barrett and a guest appearance by Bobby Bones. The star-studded event, recorded live on one stage in Nashville, will stream exclusively on livexlive.com and broadcast live across iHeartMedia’s country music radio stations in local markets and at iHeartRadio.com on October 23rd at 7 pm CT.

Capital One Cardholders will have the opportunity to enter an exclusive sweepstakes for the chance to virtually play in the iHeartCountry Capital One Trivia Night with Kelsea Ballerini, hosted by Bobby Bones. Players will receive an item signed by Kelsea Ballerini and the Trivia Night winner will announce Keslea Ballerini virtually during the iHeartCountry Festival. Capital One cardholders can enter the sweepstakes from Tuesday, September 22nd at 9 am ET through Sunday, October 4th at 11:59 pm ET.

“Despite this year’s pandemic, we are honored to still be able to host one of country music’s most anticipated nights with an iconic lineup of the genre’s biggest artists,” states Rod Phillips, Executive Vice President of Programming for iHeartCountry. “Although fans won’t be able to celebrate in person, the show will be available to our millions of listeners across our iHeartCountry stations nationwide and through the exclusive stream on LiveXLive.”

The iHeartCountry Festival is an iHeartMedia Production. Capital One will be the national presenting partner for the event. Proud partners of this year’s event include Country Crock, Jane, Progressive Insurance, Tito’s Handmade Vodka and St. Jude Children’s Research Hospital as the exclusive charity partner.