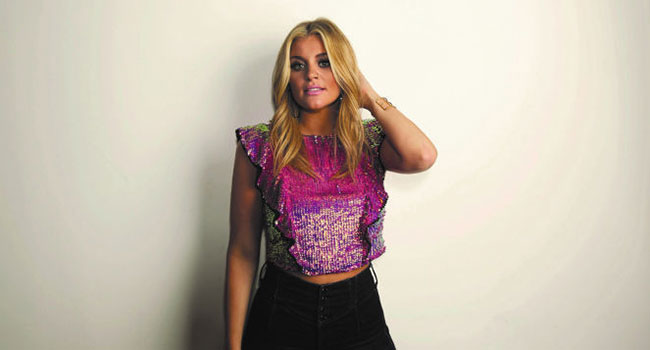 People tend to think that a concert review is about only two things: how well the singer sings and her ability to connect to an audience. Sure, those are at the top of the list. But they are far from the only things observed when a reviewer like myself attends a concert. There’s production value, musicianship, setlist flow, showmanship, how the crowd is responding… the list goes on and on…

Lauren Alaina’s set Monday night (January 27th) at the Bowery Ballroom hit every single mark above, and then some. For context, you have to understand the types of venues Alaina is playing on her #ThatGirlWasMe tour.

Alaina is performing in small, intimate showrooms known as “General Admission” venues. You know the kind: musty, cavernous, no chairs, small stage, everyone crammed together in an endless mosh pit. Oh, but there’s a balcony with chairs and cushy sofas for VIPs (and..**cough**…media. Thank you, record label).

For her first headlining tour, the American Idol alum is not going to fall into the usual “General Admission” tropes. She’s too seasoned to let a small stage and cramped crowd mean a show with minimal elements.

Far from it. Lauren had videos in the background for every song, and three outfits. Alaina did what most artists deem impossible: She turned the Bowery Ballroom into a mini-arena.

Despite being only 25, Alaina has had over a decade of experience singing experience, bursting onto the scene via Idol’s 2011 season. She came in second to another country artist, Scotty McCreery.

Since then, Alaina has spent the past nine years as an opener for country megastars. But her relatability and willingness to be vulnerable on stage has earned her legions of fans as she paid her dues around the country. Now, Alaina is taking the brave first step to headline her own small tour, before heading out on the road with Blake Shelton this spring.

How did Alaina pull this off? Between songs, short packages would play, narrated by Alaina, about her career accomplishments: ACMs, CMAs, dreams come true…at times, it could come off as a little self-serving. But those that know Lauren Alaina know she got where she is by being her true, honest, authentic self to all people and at all times. Her fans even where onsies to meet her because they know she loves them. Lauren wears onesies with puffy 90’s collars. Her fans, ones with unicorn horns. To each their own.

Never one to hide herself behind the music, the concert served as a musical “diary,” her words, and ranged emotion. Not just happy to sad, mad to mournful. Her music went from party time (“Georgia Peaches”) to soul-bearing sorrow (“The Other Side.”) The latter was dedicated to her late step-father, Sam Ramker, Jr. What other country singer would choke up in front of their audience talking about their family member’s battle with cancer?

That’s what makes Alaina so special: her ability to connect is unparalleled in our generation of artists. In a world where everything is so aesthetically polished, a digital wasteland of dimensionless ones and zeros that craft an image destined for the most followers and likes, Lauren Alaina chooses to be real. And not just manufactured real. Really real.

It is also why “Ladies in the 90’s” is a quintessential song for Alaina’s career. She is an old soul born to serve the wrong decade. Like Luke Combs, Lauren is a product of the 90’s that wishes to build a time machine back there. And with her Trisha Yearwood mom jeans, Shania Twain sparkle, and powerful voice that is meant storytelling, she very nearly does.

And yes, there is a problem at country radio with the airtime disparity between male and female artists. But you wouldn’t know it by the way all the redneck dude-bros (meant endearingly) at the concert were screaming the lyrics to “Next Boyfriend.” It gives me hope that maybe, just maybe, she could be the artist to crash through that FM glass ceiling once and for all.

The greatest thing about being a music journalist is jumping on a wave as its rising. And this brings me back to my original point: when I you observe everything from the artist to the crowd’s response to that artist, the future becomes pretty predictable. Lauren Alaina has become successful through grit, determination, and a willingness to be vulnerable and genuine in everything she does to connect with country fans.

Lauren, if you happen to read this on the bus, let me just say that Sam is going to have a lot more to be proud of than a sold out General Admission tour. And if station owners who insist that no female artists be played back-to-back don’t like it, well…That’s Somebody Else’s Problem.

Lauren Alaina’s That Girl Was Me Tour continues through the winter. Alaina then heads out on the road to open Blake Shelton.