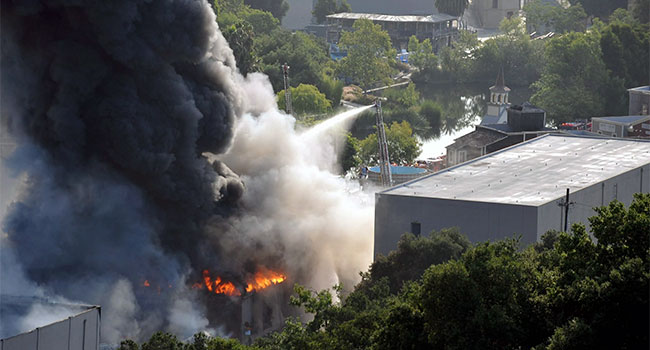 Universal Music Group (UMG) is following up with their plans for being “transparent” to artists following a 2008 fire that destroyed hundreds of thousands of master recordings from their vast catalog after covering up the loss for more than a decade. Two weeks ago, the New York Times revealed that nearly 500 thousand master recordings were destroyed in a blaze that ripped through the NBCUniversal backlot storage facility they were kept in June 2008. The article named more than 100 acts that were affected by the blaze. Yesterday (June 26th), the Times unveiled a list of nearly 700 more artists that are believed to have lost masters in the fire.

“Today, I’m writing to you at the request of Sir Lucian following his note about the 2008 fire at NBCUniversal Studios to update you about the steps we have taken to provide our artists with transparency and answers as quickly as possible,” Kraus shares.

The memo continues, “Since last week, we have taken the below steps:

“With this team in place and responding to requests as promptly as possible, I wanted to also remind you that, if an artist or their representative inquires about the status of archived assets, please immediately ask them contact me at [redacted].

“We will continue provide you with updates.”

The memo follows UMG Chairman and CEO Lucian Grainge internal memo last week to staffers stating, “Let me be clear: we owe our artists transparency. We owe them answers. I will ensure that the senior management of this company, starting with me, owns this.”

We have reached out to a handful of artists’ teams requesting comment on the situation, but are still awaiting responses.

The plaintiffs are seeking to recover “50% of any settlement proceeds and insurance payments received by UMG for the loss of the Master Recordings, and 50% of any remaining loss of value not compensated by such settlement proceeds and insurance payments.” UMG reportedly valued its losses at $150 million during 2009 legal action against NBC for the fire in which they were paid.

At the time of the fire, UMG reps claimed their losses were minimal, but the lawsuit claims the company didn’t reveal the full extent of their losses for personal gain.

It continues, “UMG did not speak up immediately or even ever inform its recording artists that the Master Recordings embodying their musical works were destroyed. In fact, UMG concealed the loss with false public statements such as that ‘we only lost a small number of tapes and other material by obscure artists from the 1940s and 50s.’ To this day, UMG has failed to inform Plaintiffs that their Master Recordings were destroyed in the Fire.

“Even as it kept Plaintiffs in the dark and misrepresented the extent of the losses, UMG successfully pursued litigation and insurance claims which it reportedly valued at $150 million to recoup the value of the Master Recordings. UMG concealed its massive recovery from Plaintiffs, apparently hoping it could keep it all to itself by burying the truth in sealed court filings and a confidential settlement agreement. Most importantly, UMG did not share any of its recovery with Plaintiffs, the artists whose life works were destroyed in the Fire — even though, by the terms of their recording contracts, Plaintiffs are entitled to 50% of those proceeds and payments.

“Plaintiffs bring this class action on behalf of themselves and all similarly situated recording artists, and their heirs, successors or assigns, to recover (1) their contractual entitlement to 50% of any settlement proceeds and insurance payments received by UMG for the loss of the Master Recordings, and (2) 50% of any remaining loss of value not compensated by such settlement proceeds and insurance payments.”

An unnamed financial analyst confers the attorney’s remarks, stating, “The harm was caused to Universal — the fire damaged their property. And if there are any artists whose [ownership of the masters] will revert to them in the next decade or so, they could try to seek some sort of compensation — but then I assume that in any successful claim there may be an opportunity for Universal to claw that [money] back from NBC, who owned the facility.”