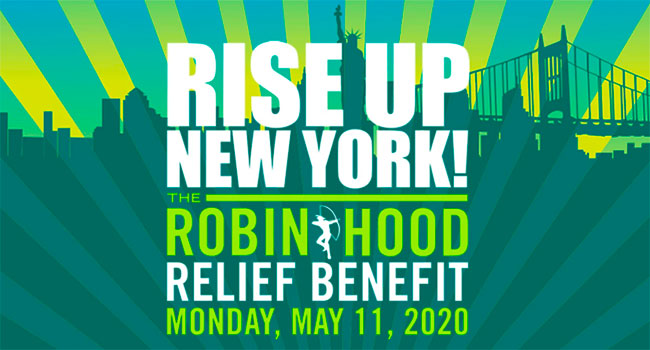 Robin Hood , New York’s largest poverty-fighting organization, and iHeartMedia will join together with New York television and radio stations to air a citywide “virtual telethon” called Rise Up New York! on Monday, May 11th to raise awareness and funds to help New Yorkers whose lives have been dramatically impacted by COVID-19. The show will bring together New York City’s biggest musicians, actors, chefs and more with one common goal: To raise funds for Robin Hood’s relief and recovery efforts, deployed directly to the organizations on the frontlines that serve the city’s most vulnerable during the current crisis and its aftermath. One hundred percent of donations will provide support toward fellow New Yorkers’ most urgent needs: food, shelter, cash assistance, health and mental health, legal services, education and more.

“New York City is at the epicenter of the COVID-19 pandemic. This crisis has created a whole new set of challenges for the millions of New Yorkers who already struggled to make ends meet,” states Robin Hood CEO Wes Moore. “This is a moment where we must all come together and rise up together as a community in support of our neighbors and in support of one another.”

“Every New Yorker has been impacted by this pandemic, but if you had breakfast today with your family, you’re already better off than two million of your neighbors who can’t afford to eat at all,” shares Sykes. “It’s not an easy time to ask for donations, but as little as $10 provides a meal for six hungry New Yorkers.”

Rise Up New York! was executively produced by Alex Coletti and John Sykes, President of Entertainment Enterprises at iHeartMedia, along with talent producers Casey Patterson and Rick Krim.

Last month, Robin Hood responded to the pandemic by assembling a “Relief Corps” of bighearted New Yorkers – from Eli Manning and Michael Strahan to Katie Couric and Gwyneth Paltrow – to help raise funds through their personal networks and corporate donors. The Robin Hood Relief Fund raised over 40 million dollars in the first 40 days of the pandemic and has already deployed 258 grants to 233 organizations on the frontlines. Robin Hood has a 32-year proven track record of responding first to deploy checks and provide emergency funds where help is needed most, particularly after 9/11 and Superstorm Sandy.