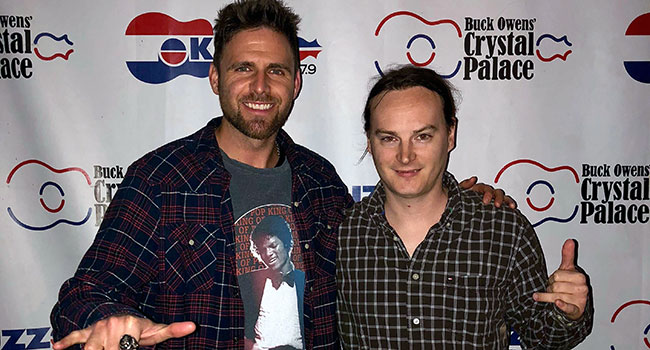 Smith had the crowd on their feet the entire night

For those who haven’t seen Canaan Smith live, do it! You won’t be disappointed! The Williamsburg, Virginia native is making quite a name for himself as an entertainer! I attended his show at the World Famous Buck Owens’ Crystal Palace in Bakersfield last night (Thurs, Nov 9th) where Smith’s setup of blinding laser lights and smoke made the smaller venue look like the large CMA stage held in Nashville a night earlier.

“This place is legendary. I’m honored to be here tonight to play my music,” Smith told the small cheering crowd as he embarks on a West Coast run of dates.

Smith’s vocal chops were showcased throughout the night as he played hits like “Hole In A Bottle” and “Love You Like That.” I wouldn’t have known he wasn’t feeling well or had partially lost his voice earlier in the day if he didn’t addressed it from the stage. His high energy show kept the crowd on their feet and singing along despite any illness. The singer/songwriter incorporated a lot of rock into his show with heavy drums and screeching guitars. His sound is a throwback to 90s with some modernization.

Smith’s show is very polished and worth attending in any setting. His songs will captivate you and take you into another world. He makes the show an experience and draws you in with his storytelling and stage presence. He has a great band, too, and even allows his drummer to solo, a rare but welcome addition to a country show.

Singer/songwriter Filmore opened the show with a 30 minute set full of originals and covers. The Wildwood, Missouri native performed singles like “You Know You Wanna” and “Left Our Mark” and is sure to breakout soon!

Both acts hung out after the show to sign autographs and pose for pics with fans. Despite meeting Smith beforehand, I stood in line to buy a CD to have it signed so I could enjoy hearing what I just saw live!

The pair round out the West Coast trek with shows in San Jose tonight (Fri, Nov 10th) and Dana Point on Sunday.