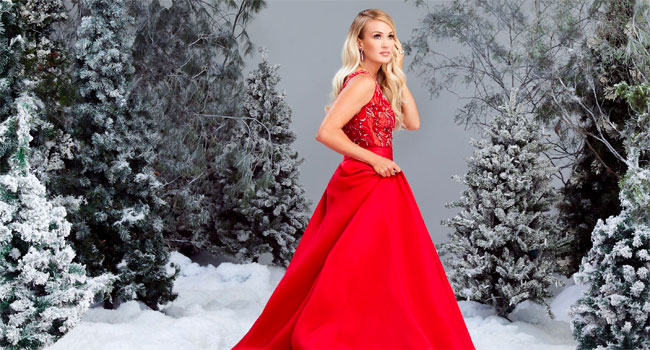 My Gift reclaimed the No. 1 spot on the Billboard Country chart last week for the third non-consecutive week, and has consistently stayed in the Top 5 on the Billboard Holiday Album Chart since its release. The album currently sits at No. 5 on the all-genre Billboard Top 200. Underwood currently has four songs on the Holiday Top 200 Streaming Chart (“Favorite Time of Year,” “Silent Night,” “Hallelujah,” and “Little Drummer Boy”) as well as four songs in the Top 30 on the Mediabase Holiday Music Chart (“Hallelujah,” “Have Yourself A Merry Little Christmas,” “Little Drummer Boy,” and “Mary, Did You Know?”).

Additionally, Underwood releases a special behind-the-scenes look from the set of the music video for her duet with fellow GRAMMY Award winner John Legend on “Hallelujah.”

The original song was written by Legend and Toby Gad (“All of Me”). The video was directed by acclaimed director and photographer, Randee St. Nicholas, who has shot multiple videos with Underwood throughout her career, including “Cry Pretty,” “Drinking Alone,” “Blown Away” and “Smoke Break,” all of which have been honored as CMT’s Video of the Year. Legend also appears as a special guest on Underwood’s new music special My Gift: A Christmas Special From Carrie Underwood, which premiered on HBO Max earlier this month and is streaming now. In celebration of the special, Underwood is set to join Late Night with Seth Meyers on December 17th followed by The Kelly Clarkson Show on December 18th. Underwood and Legend will also perform “Hallelujah” on NBC’s Global Citizen’s Prize special on December 19th.